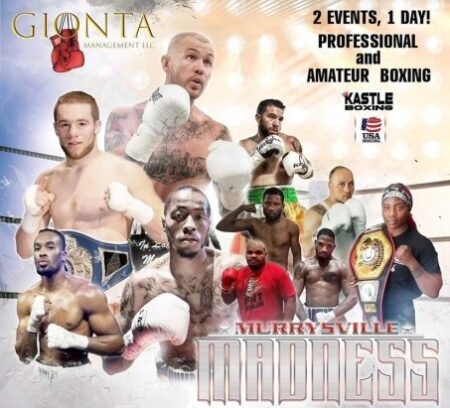 This was our first time promoting at this venue and things went really well overall,” promoter Derek Gionta said. “We will come back here, hopefully, in the near future. This was our third show this year at two different venues and it’s great to remain consistent despite the difficult times we encountered earlier this year in regard to the pandemic. The plan is to keep moving forward and building up these guys.”

“There were a number of intriguing fights. Matt Conway had a monumental victory for his 20th win as a professional. He will be come back January 15th in a big fight on our show in Cheswick, PA.”

Conway (20-2, 9 KOs) positioned himself for an IBA World title fight in January, which Gionta will promote at The Pittsburgh Shrine Center in Cheswick, PA.

Against Puente, Conway overcame Puente’s early aggression, but after the opening round, the Colombian did little more than hold. A Conway left hook dropped Puente in the second round and that marked the end of the fight and show shortly after from a referee stoppage.

The co-feature was the “Fight of the Night.” Pittsburgh super middleweight Kiante Irving (9-0-1, 9 KOs), a 2018 National Golden Gloves Champion, and Antonio Louis Hernandez (5-11-3, 3 KOs), battled to an exciting 6-round split draw.

Irving won the first three rounds, primarily by using his stiff jab and landing solid rights to Hernandez’ body. Hernandez, however, owned the last three rounds, controlling the action and landing power shots that hurt Irving on multiple occasions. High drama filed the room as Irving proved a chin and heart to go along with his power. Hernandez, sporting a deceiving record and at just 22 years old, has time to turn the corner and make up for early struggles against high quality opposition. Both sides have expressed interest in a rematch.

Ohio lightweight Ryizeemmion “The Humble Beast” Ford (6-1, 4 KOs) dominated Carlos “Jaguar” Jimenez (1-3-1), of Mexico, setting the pace until he landed a hard right that buzzed Jimenez. A follow-up attack prompted the referee to halt the action midway through the opening round.

Pittsburgh super middleweight Eric Lomax kept rollin’, setting the pace and blasting out Jacob Ikaika Martin (1-1) with only 9-seconds left in the fourth and scheduled final round. Lomax passed the test in impressive fashion as he boxed well and fought with explosiveness in spurts.

Kyrgyzstan native Baszybek Baratov (5-1-2, 1 KO), who fights out of Monroeville (PA), defeated Buffalo featherweight debutant Joe Reed, winning a unanimous decision. Scores were 40-36 x 2 and 39-37. “Baz” was slippery on the defense, while picking shots from all angles while Reed stood conventional and had some success of his own at times.

In the first match of the evening, southpaw Paul Palombo won his pro debut when his opponent, middleweight Jabrandon Harris (0-7) of Texas was unable to continue after two rounds. Palombo boxed well out of his southpaw stance and turned it up after a quiet opening round and picked his shots nicely on the inside. 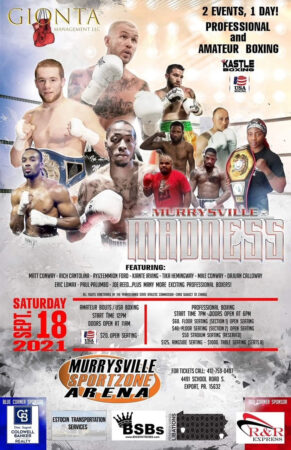 Local promoter Derek Gionta is on a mission to help bring Pittsburgh boxing back to close to its past glory days, in which great fighters were developed there such as Hall of Famers Harry “The Pittsburgh Windmill” Greb and Billy “The Pittsburgh Kid” Conn, as well as world champions Michael Moore and more recently Paul Spadafora.

“Pittsburgh can certainly get back to being a true boxing town,” Gionta believes. “We have already seen a recent revival in the sport here. The key is to have enough shows to keep fighters busy so they can develop and eventually move on to a bigger stage. Maybe some of the bigger events can take place here as enough fighters develop?

“I’d like to remain active promoting shows here and in neighboring cities with some people that we already have good relationships with. I want to continue building up fighters here!”

Gionta is bringing professional and amateur boxing back to the Greater Pittsburgh area this Saturday night as Gionta Management presents “Murrysville Madness” at Murrysville SportZone in Murrysville, Pennsylvania. 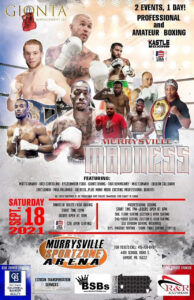 An amateur show, co-promoted by Gionta Management and Kastle Boxing of Johnstown, Pennsylvania, will take center stage during the afternoon, starting at 12 p.m. with a separate admission of $20.00

“I hope to continue promoting shows here (30-minute drive from downtown Pittsburgh) in this region moving forward,” promoter Derek Gionta said. “With another friend of mine promoting here, we can keep these guys busy, and look forward to moving them into bigger opportunities.”

Pittsburgh junior lightweight Matt “Sweet Child” Conway (19-2, 8 KOs), the reigning IBA Intercontinental Junior Lightweight Champion, will headline “Murrysville Madness” in the 8-round main event against an opponent to be finalized.

Ohio lightweight Ryizeemmion “The Humble Beast” Ford (5-1-0, 3 KOs) steps up in his first scheduled 6-rounder versus an opponent to be determined.

A 4-round featherweight match between Buffalo’s pro-debuting Joe Reed and Kyrgyzstan-native Baszybek Baratov (4-1-2, 1 KO), fighting out of Monroeville, PA, has the potential to steal the show.

2019 National Golden Gloves Champion Chatiqua “Tika” Hemingway (1-0), managed by Split-T Management, is slated to be in action against a female super middleweight to be determined.