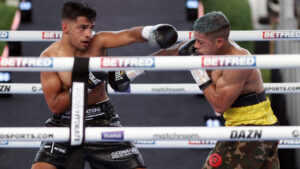 Oldham prospect Aqib Fiaz advanced his record to 7-0 as he defeated Spain’s Kevin Baldospino on points. The 21-year-old was made to work hard and that was reflected in the 77-76 scorecard.

“I’m just glad to be back after such a long layoff,” Fiaz told Matchroom. “It’s good to get back in there and get the win. It wasn’t my best performance, but I got the win most importantly. It was emotional to get back in there, especially here as well. It meant a lot to me. I had to come in and do my job no matter what.

“It wasn’t my best performance. We’re going to go away and look at the mistakes I made, then we’ll definitely work on them and be better next time. Even going into the last round, I felt I did enough to win. It was probably the right decision yeah. He was a tough man. I hurt him a couple of times and he stuck in there and dug in. Credit to him.

“I’ve had a lot going on, and my team have had my back. They’re like father figures to me. They’ve been there for me when I’ve been at my lowest. I’m here today because of them. Ten months is probably the longest layoff that I’ve ever had in my amateur career and pro. It’s good to be back, but let’s be back soon.”

Fight Notes: Jazza Dickens came up short in his bid to become world champion as he was defeated by Kid Galahad on Saturday night.

Dickens was facing Galahad for the IBF featherweight title at Matchroom Fight Camp in Essex, with the event broadcast live on DAZN.

The Liverpool boxer started the fight well in the opening round, but Galahad began to pull away as the fight progressed, with Dickens suffering a bad cut.

Galahad was dominant in the later stages, and it led to the Dickens corner deciding to pull their fighter out at the end of the 11th round.

With the win, Galahad is the new IBF featherweight world champion.

Fight Notes: From the first bell, Webb jumped on Wardley with some hard punches that seemed to momentarily rock him. Wardley weathered the storm and returned fire, eventually flooring Webb. The attack resumed with the referee waving off the bout in what could be seen as an early stoppage, even if the writing seemed on the wall for Webb.

Fight Notes: In an absolute barroom brawl from the first bell, the bout was eventually stopped by Bennet’s corner at the end of the 5th round. What a fight!

In the post-fight live interview, Savage proposed to his partner.

Fight Notes: Whitaker was down twice in round 2. The referee stopped the fight when the follow-up attack became too much for Whitaker.

On the first knockdown, an extra punch went in when Whitaker was down but it was not intentional with Fisher immediately apologising. Time of the stoppage was 1:08 of the 2nd round.

Fight Notes: Connolly was down in round 3. Referee Kieran McCann let her continue but Bridges landed another hard punch prompting the stoppage. Time of the stoppage was 1:22 of the 3rd round.

Fight Notes: The opening bout went the distance with Fiaz winning by referee Kieran McCann’s scorecard with a score of 77-76.

Dickens said: “I’ve had great preparations thanks to my team, everyone around me. I’m grateful to be on this platform, DAZN and Matchroom, kicking off some great nights head. I’ve had great fights leading up to this point and it’s a fight for a World Title, I’ve ticked every box below so now I’m in a good position now.

“People talk about game plans, I don’t really consider them too much because they go out the window, when something is going well you keep doing it, you adapt on the fly. I’ll be resilient in there and able to adapt to anything that he brings.

“It’s the best to think like that, this sport is the best and worst, I’ve endured both sides and come through it. To get my crown on Saturday it would be beautiful, I’m grateful to be on this platform.”

“Jazza is a tough fight for anyone, no matter what level. I can’t actually remember much from the first fight; I can’t even remember what happened yesterday let alone what happened ten years ago. I just focus on what’s ahead. I’m focused on Saturday night and doing a job on Jazza Dickens. 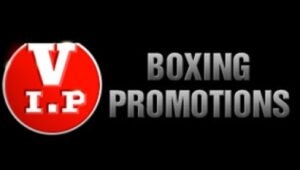