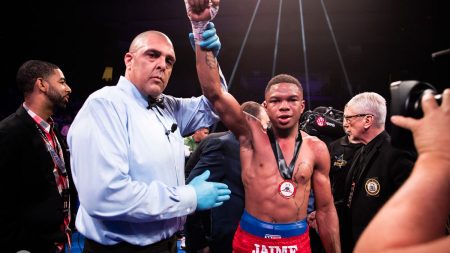 The Panamanian Jaime Arboleda pulled out all his courage and experience to defeat the Dominican Nicolas Polanco by majority decision last Friday at the Vasco Nuñez de Balboa Convention Center, in Panama City.

The judges’ scorecards were 95-93, 95-93 and 94-94, which gave the home fighter an important victory in his aspirations and showed great mettle after overcoming very difficult moments in the bout that took place at super featherweight.

Arboleda was dropped twice during the second round and that start of the fight was quite tough for him. However, he had enough patience to keep working and keep adding rounds during the fight and in the end get the close victory.

The WBA’ss eighth-ranked fighter took a good step in his quest for a world title shot and improved his record to 18 wins, 2 losses and 14 knockouts. Polanco now has 20 wins, 2 losses, 1 draw and 11 knockouts.