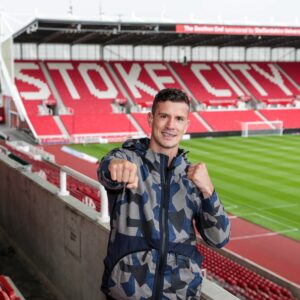 Nathan Heaney described stepping out onto the pitch at the Bet365 Stadium as an exhilarating experience as he got to milk the applause of the Stoke City faithful on day one of the EFL Championship season.

Heaney, of course, already enjoys an unbreakable bond with his hometown club and walks out for his fights to the backdrop of the Tom Jones hit ‘Delilah’, which also serves as the club’s inspiring anthem.

The unbeaten middleweight himself acknowledges that his rise in prominence and increase in exposure came about when footage of his ring entrance went viral a couple of years back and it has gathered significant momentum ever since.

Hitman Heaney, 12-0, took to the pitch during the half-time break against Reading to further promote his next fight, which will take place at the Utlilita Arena, Birmingham on Saturday August 28, live on BT Sport.

The popularity of the 32-year-old Stoke fanatic is now such that some 1,500 tickets have been sold personally by Heaney, which will guarantee a passionate and noisy atmosphere in Birmingham. In fact, were Stoke not playing away at Fulham on the day, Heaney believes he would have added a further 500 to his ticket tally.

This wasn’t actually the first time that Heaney has taken to the pitch at his home ground, but his recognition has spiralled in between times.

“I first got to go on about two and a half years ago after I won the Midlands Area title and no-one would have had a clue who I was,” conceded the now fighting pride of Staffordshire. “It has definitely changed now and it was exhilarating going on the pitch to acknowledge the fans.

“When I went to my first game in 18 months recently against Aston Villa people were coming up to me asking for pictures, so it was dead weird. It wasn’t like that before and I expect a good few of the 1,500 who will be at my fight were in the crowd today.

“I’d say probably around 50% of my supporters come from a Stoke City connection, probably even more. Originally it was around 10 or 20% and was just my mates who I went to football with along with family.

“Now it is definitely growing and I would say out of the 600 that went to Telford last time, around 300 would have been Stoke fans.

“The connection with the football club has been massive for me and truly amazing. The club have been incredible with me and, even when it comes to something like away travel, I message in asking for help and they get the coaches leaving from the away depot. They do it for absolutely nothing and they are making my life so much easier and for my supporters as well.

“Stoke are amazing because I am really a no-one, I am not a football player, I am just a boxer from Stoke and they are backing me amazingly.”

Heaney agrees that his supporting cast have become an attraction in their own right with their rendition of ‘Delilah’ to welcome him into the ring.

“One million per cent and it will be interesting to see what it will be like after this next fight. Nearly 600 went to Telford and the atmosphere was incredible, whereas this time there will be almost three times the amount. I have looked at the seating plan and my lot will take over about a whole third of the arena.