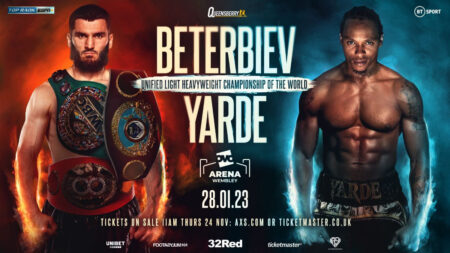 The 175-pound showdown will be shown on BT Sport in the UK and on ESPN+ in the U.S.

The WBO No.1 contender gets his shot at the Montreal-based Beterbiev (18-0, 18 KOs), boxing’s only world champion with a 100 percent knockout ratio. He will be fighting professionally in the United Kingdom for the first time, with the highly decorated former amateur having fought in London at the 2012 Olympic Games.

Promoted by Frank Warren and Queensberry, in association with Top Rank, this huge 175-pound showdown will be shown exclusively on BT Sport in the UK and streaming live and exclusive on ESPN+ in the U.S.

Tickets for Beterbiev vs Yarde at The O2 on Saturday 28 January 2023 go on general sale at 11am on Thursday 24 November from AXS.com and ticketmaster.co.uk.

“This will undoubtedly be the biggest challenge of Anthony’s career to date, and we have made sure he will get the best conditions possible by securing him home advantage,” said Yarde’s promoter, Frank Warren of Queensberry. “It is going to be a huge occasion at the OVO Arena Wembley, which is the same venue where Anthony made his professional debut in May 2015.

“Of course, we know a great champion like Beterbiev has no fears of travelling and virtually all of his biggest wins have come outside his now home nation of Canada. Boxing is all about timing, and we are hoping the time is right for Anthony to fulfil his huge potential and pull off what would be one of the biggest wins by a British fighter.

“This is going to be a spectacular show staged in conjunction with our friends at Top Rank, and I am sure it is an event the public will get behind in massive numbers to support Anthony’s attempt to achieve his dream.”

“This is a matchup between two of the most devastating light heavyweight punchers, and I look forward to the great Artur Beterbiev showcasing his prodigious talent for the incredible UK fans,” said Top Rank chairman Bob Arum. “Anthony Yarde was ringside for Artur’s last fight, and he certainly does not lack confidence. He is a dangerous fighter, and I know Artur will be switched on for one of the toughest bouts of his illustrious career.”

Beterbiev won his first world title in November 2017 with a 12th-round stoppage of Enrico Koelling and defended his IBF belt on two further occasions – including against Britain’s Callum Johnson – before entering into a unification match against WBC champion Oleksandr Gvozdyk in October 2019. Ukrainian puncher Gvozdyk, who was unbeaten at the time, was stopped in the 10th round.

Beterbiev defended his titles against Adam Deines and Marcus Browne ahead of a three-belt unification against WBO champion Joe Smith Jr. in June at Hulu Theater Madison Square Garden, where the American was stopped in two rounds. In the amateur ranks, Beterbiev won silver at the 2007 World Championships before striking gold at the 2009 event. He also won gold medals at the 2006 and 2010 European Championships.

“I never back down from a challenge, and Anthony Yarde is a top contender who asked for this fight. I look forward to fighting in London for the first time since the Olympics,” Beterbiev said. “Yarde called me ‘slow’ after my fight with Joe Smith Jr., but slow and steady wins the race. And on January 28, I will win in London.”

The Wembley event represents a second world title attempt from Yarde (23-2, 22 KOs) who previously travelled to Chelyabinsk, Russia, to take on the long-standing champion Sergey Kovalev, ultimately being stopped in the 11th round after coming close to forcing a finish himself in the eighth round. Yarde’s first title came in fight No. 11 when he knocked out Chris Hobbs in four rounds for the Southern Area belt.

Yarde then fought seven consecutive fights with either the WBO European or Intercontinental belts at stake, or both, as Yarde knocked out each of those foes in seven rounds or less.

Post-Kovalev, Yarde continued with fights during the pandemic against Dec Spelman and a domestic dust-up against Lyndon Arthur. Yarde dropped a split decision against his Manchester rival, and after a swift comeback fight in Birmingham, Yarde sought redemption against Arthur. The vintage Yarde returned, and he knocked out Arthur in four rounds to once again earn the WBO No. 1 spot.

“January 28 will be my night,” said Yarde. “My destiny playing out in my home city, and this is what I have been longing for throughout my professional career, which started at Wembley. I won’t make any big predictions for this fight against a strong unified champion in Artur Beterbiev, but what I will say is that I will leave nothing to chance, and I am at my best when I fight fire with fire.”

Tickets for Beterbiev vs Yarde at The O2 on Saturday 28 January 2023 go on general sale at 11am on Thursday 24 November from AXS.com and ticketmaster.co.uk.