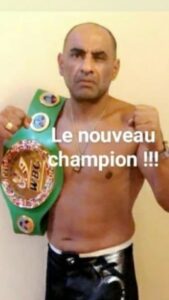 Mahjoub Jarradi is a boxer and a French fighter born September 8, 1973 in Brunoy in the department of Essonne (91). Mahjoub Jarradi comes from a Tunisian immigrant family made up of four brothers and two sisters. The father worked as a baker and his mother was like many women of the time a stay-at-home mom. He grew up in a united family which transmitted to him values, the taste for effort, work etc …

At the age of six on June 11, 1984, he lost his dad following a road accident, this bereavement would mark him forever and give him that combativeness which still characterizes him today.

The first contact he will have in sport takes place in the Sénart forest during a walk he takes alone, he meets a man who trains and who was Maurice Dutartre who was European champion of Thai boxing, seeing his great interest suggests him coming to train at the club of Boussy the feeling having passed between the two men and one can say that thanks to this meeting Jarradi puts his first steps in the combat sports, it should be specified that Maurice Dutartre was the pupil of Dominique Valera.

In the club it is taken under the leadership of Mr. Dutartre a great confidence was established between the two men.

Two years after the arrival of Jarradi at the Boussy Saint Antoine club arrived the famous Thai boxing champion Krongsak this great champion lavishes his training on the young Jarradi who is progressing very quickly in the discipline.

Jarradi goes to class A and remains fifteen years at the club and will total 73 fights in Thai boxing then Maitre Krongsak leaves the club and The young Jarradi decides to rub shoulders with the boxers of the South and in another discipline: English Boxing for that he leaves s ” install in Marseille on the advice of Moustapha Ham and push the door of the famous boxing club of Mr. Jean Molina the Marseillais Olympic Ring he will perform thirteen fights in English boxing he will keep and thank Jean Molina every day for allowing him this beautiful and excellent course in boxing.

After this period he made a passage in MMA which at the time was not authorized also he performs clandestine fights in total three including a fight which he will win by KO against Ismaël Youla champion of France of the light heavy in boxing English, he pushes his notoriety by a video posted on YouTube with more than two million views or he performs a low kick on an iron pole, since this video he is nicknamed the iron leg.

We notice him and he is offered Thai boxing fights his dream: to meet Moussa Konater, Thai boxing champion, whom he will meet the first time after being contacted at short notice by the Konateam to face Konater following the defection of the opponent. official. Following this fight which he won by a draw (but the officials will declare him the winner), he will be classified vice-world champion WBC by creating the surprise indeed everyone sports predicted a victory of Konater, since, Moussa Konater him offers a rematch soon, case to be continued.

During this faultless and exemplary journey Jarradi has always been grateful to Fabrice Benichou, Hafed Benfara, Moussa Konater, Jean Molina, kader marouf, ali sadok his people who trusted him and rightly this journey of this high-level strength athlete the respect.