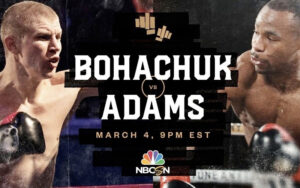 “He was a tough guy,” said Adams. “He brought another side out of me that I knew was inside. I had to dig in deep tonight and use all the strength that I had to connect with one of those punches from the cannon.

“It was real tough fighting in there tonight” he continued. “The ring was wet. The ref was against me tonight. It was an uphill battle. I am an explosive fighter and I couldn’t take advantage of that because I didn’t have my legs under me because the ring was wet. But even though I was irritated, the show must go on. I am a pro. I have to figure out how to get the W and that’s what I had to do. I am grateful for the win. I loved Puerto Rico, everyone out here embraced me with love.”

Fight Notes: Zambrano was dropped in round 1 and a further two times in round 3. Time of the stoppage was 2:21 of the 3rd round.

Fight Notes: Madiyev was deducted a point for hitting behind the head in round 5. Zorrilla was down in round 8 and stayed down for a period of time and then indicated he could not continue after indicating to the referee it was another shot behind the head. The fight then went to the scorecards with Zorrilla up 77-75, 77-74 on two cards with Madiyev up 76-73 on the third card. With the scores, the bout was declared a eight round split technical victory for Zorrilla.

Fight Notes: Torres was down twice in the fight.

Bohachuk started by controlling the fight more effectively, building up a comfortable advantage on the judges’ scores. In the eighth round, during an exchange of blows…BOOM, Adams landed a powerful left hook to the jaw, sending the Ukrainian crashing down to the canvas. Bohachuk bravely got up, but on unsteady legs, so the Referee stopped the fight. Behind on the scorecards, Brandon blasted his way to victory.

On the same card, super featherweight Bryan Chevalier (15-1, 12 KOs) defeated Carlos Zambrano (26-2, 11 KOs) by knockout in the third round.