A three-division world champion, Casimero (31-4, 21 KOs) made his second successful title defense at 118-pounds, earning a career-best victory over the longtime 122-pound champion Rigondeaux (20-2, 13 KOs), who moved down to bantamweight in 2020.

“I’m excited to get the win,” said Casimero. “Rigondeaux is a good boxer and two-time Olympic gold medalist. I was worried, because he said he wouldn’t run, but he ran the whole time.”

The bout started with an eventful first round, in which it appeared for a moment that a Casimero left hook to the back of Rigondeaux’s head would lead to a knockdown, but referee Jerry Cantu ruled the moment a slip. During the exchange, Casimero threw several punches while Rigondeaux was on one knee, earning a warning from the referee.

From that point on, Rigondeaux remained steadfast to a defensive strategy that saw Casimero forced to chase his opponent around the ring. Meanwhile, Casimero stayed dedicated to pushing forward, looking to slow Rigondeaux down with body shots to set up power shots to the head.

“My expectations were for a knockout,” said Casimero. “Me and all my fans wanted that. I did my best to knock him out, but he was just running and not fighting.”

Rigondeaux was content countering his charging opponent, doing a majority of his damage with variations of his dangerous left hand. In a bout with numerous close rounds, Casimero ended the fight with a narrow 47 to 44 edge in punches landed, including a 41-28 tally in power punches.

Those power punches and sustained aggression proved to be enough for Casimero to hold onto his 118-pound title in the eyes of the judges, as scores of 117-111 and 116-112 overruled one judge’s 115-113 card in favor of Rigondeaux. While Rigondeaux disputed the decision, Casimero looked forward to potential unification clashes with WBC champion Nonito Donaire and WBA and IBF titleholder Naoya Inoue.

“Nobody wants to fight with me because I frustrate them in the ring,” said Rigondeaux. “I landed the punches that I needed to in order to win the fight tonight. This is how I win. I have these God-given skills and this is the way I display them. I’m a unique fighter. It’s my style and it’s the only one I know. You can see I’m still better than anyone else in the lighter weight classes and I’m going to keep fighting.”

“I had a three-fight plan,” said Casimero. “First was Rigondeaux, and I beat him. Next is Nonito Donaire and then finally Naoya Inoue.” 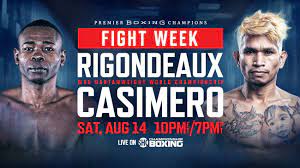 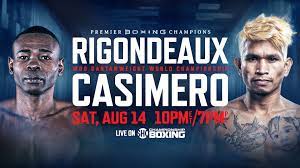 The SHOWTIME CHAMPIONSHIP BOXING telecast will begin at 10 p.m. ET/7 p.m. PT as Casimero fights in the U.S. for the third time, this time headlining a Premier Boxing Champions event. Here is what the three-division world champion Casimero had to say about this Saturday’s showdown and more:

On his current training camp:

“This has been a fantastic training camp. I’ve really been focusing on my conditioning so that I can keep my strength for all 12 rounds. This has been the best training I’ve had in a while, because for this fight I had a set date and plenty of time. For my last fight, the date was changed because of the pandemic and that was difficult to work through. But this camp has been very smooth.”

On training alongside his mentor and promoter Manny Pacquiao:

“Manny is my idol in this sport. It’s great for me to be able to watch how he trains every day. He helps me with some aspects of boxing, but most important is the motivation I get from watching him work.

On fighting in front of Southern California’s Filipino population and returning to fight at Dignity Health Sports Park:

“I always want to go out and do my best for the fans. There are going to be a lot of Filipinos there and I want more than anything to give them a great fight to watch. This is the same place where I won the interim title in 2019, so it will be very special to me to go defend my world title and put on a great performance in that ring once again.”

On what style he expects Rigondeaux to bring into the ring:

“I know that I can make this an easy fight for myself. I want him to have some guts and be the exciting fighter he’s shown recently. It will be better for the fans and it will really prove who is the best.”

On what message he wants to send to the rest of the division with win:

“I want to show that I’m strong and can beat any tough opponent. A win over Rigondeaux will solidify me as one of, if not the best, fighter in the bantamweight division. My goal is to take care of business on Saturday night, then go after the scared Nonito Donaire.”

ABOUT RIGONDEAUX VS. CASIMERO