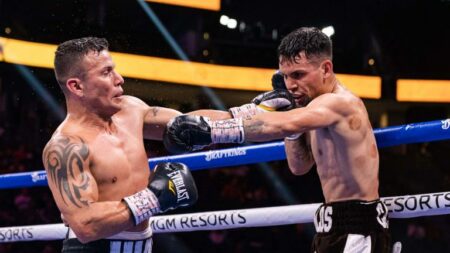 Carlos Castro (27-0, 11 KOs) turned in the finest performance of his career, stopping former world title challenger Óscar Escandón (26-6, 18 KOs) in the 10th round of their back-and-forth featherweight encounter.

Castro used his height and reach to keep Escandón at bay early on. Escandón was game throughout. Late in the first, he pinned Castro against the ropes and buckled him with a hard left hook.

By the start of the second, Castro was back to using his jab and timely footwork. His punch output increased with each passing round.

Escandón began to show signs of wear in the fifth. Castro was now landing to head and body with regularity. Early in the seventh, Escandón was badly wobbled by a right hand. Castro pounced, unloading a series of power shots. Escandón countered with a wild left hook that missed. The force of the blow drove Escandón to the canvas. Referee Celestino Ruiz improperly ruled it a knockdown, which was later overturned and ruled a slip.

Castro sought to close the show but Escandón showed incredible heart, fighting him off until Castro was forced to retreat. The crowd roared their approval at round’s end.

Castro continued to dominate in the ninth. He closed the show in the tenth, landing another big right followed by a volley that floored Castro. Ruiz mercifully waved it off at 1:08 of the 10th round.

“Escandón has been in there with the best. He’s gone a lot of rounds with world champions,” said Castro. “But it was just a matter of time, picking our punches. I sat down a little more on my shots. I’ve been with Manny Robles for only four months. With a little more time, I think we’ll be able to dominate the division.”

“I knew it was going to be a slow start,” Castro said. “Manny Robles taught me a lot, but a year and a half out of the ring, a new coach—it’s always different. Sparring and training is always different from fights, so I feel great and happy for the opportunity. I have to keep progressing.”

“I fought my heart out and gave my best effort, but it just wasn’t my night tonight,” said Castro. “I had him hurt in the first round, but I didn’t have enough time to finish him off. I give Castro a lot of respect, he’s a great fighter and showed great sportsmanship. I’m not done and I will be back. What’s next is up to my promoters, Castro said. I’m going to take some time off to spend time with my family, thank my coaches and enjoy the victory.” 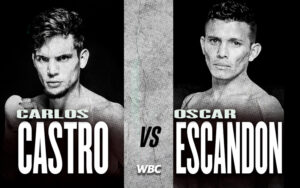 Carlos Castro, will put his undefeated record at stake when he fights Oscar Escandón, in a duel, with the WBC Americas Continental featherweight belt on the line, as part of the undercard of Pacquiao vs. Ugás, this Saturday at the T-Mobile Arena in Las Vegas, Nevada.

Castro, aged twenty-seven from Ciudad Obregón, Sonora, but now based in Phoenix, Arizona, will get into the ring with a 26-0 record, with 11 knockouts.

In his most recent bout, he knocked out experienced Mexican fighter Cesar “Corazón” Juárez in four rounds. This victory gave him a lot of projection worldwide.

Escandón has not fought since December 2019, when he knocked out Jhack Tepora in just one round. He has a record of 26 wins, 5 losses, with 18 knockouts.

The fight, which is promoted by the Premier Boxing Champions, will be televised on PPV.