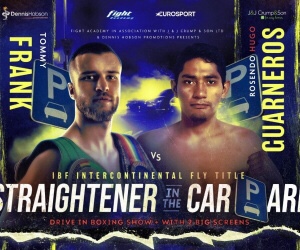 Drive-in Show in The Car Park of Sheffield Arena

Fight Notes: Frank was pulled out by his corner after the eighth round having battled for five rounds using just one hand after injuring his left shoulder. Mark Lyson, the referee, accepted the retirement from the Frank corner.

Fight Notes: Williams’s corner pulled him out at the end of the 3rd round. Jamie Kirkpatrick was the referee and accepted the corner request.

Fight Notes: Score was 39-37 on referee Jamie Kirkpatrick’s card. Bout was made at bantamweight.

“I promise you he will win something big,” Hobson said. “He doesn’t realise what he has proved to me. You have seen it before with me with Clinton Woods, Stuart Hall and Jamie McDonnell who came to me after a loss. That is a loss, but it is a learner not a loss.”

“I got the same buzz when I had Ricky Hatton in Vegas putting this together,” Hobson said. ”No one else had ever done it and we have made a big statement tonight of out intentions for next year. We’ll keep it under wraps, but in the next couple of months we are going on a big journey.”