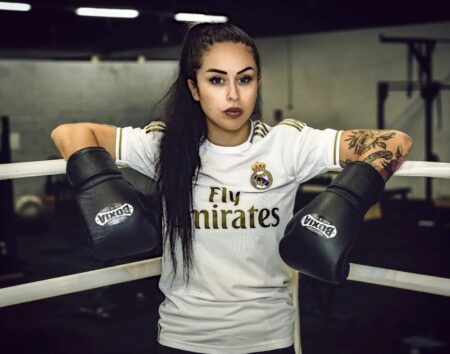 On November 5 at Palazzo dello Sport in Rome (Italy) European middleweight champion Matteo Signani (Italy, 30-5-3 with 11 KOs) will defend against Ruben Diaz (Spain, 26-2-2 with 17 KOs) on the 12 rounds distance in the main event of the Roma Boxing Night, promoted by Opi Since 82-Matchroom-DAZN and streamed live in 200 countries by DAZN.

She last fought on November 21, 2020 when she defeated on points Anna Lisa Brozzi for the vacant Italian belt. Born in Rome 26 years ago, nicknamed “Russian” (because her mother is Russian), Maria Cecchi had a good amateur career winning silver belts at the Italian championships and at the Italian Golden Gloves and was a member of the Italian national team. On November 5, she will debut as an Opi Since 82 fighter.

Maria, where are you training for your comeback fight?

“I am training at Olympic Boxe Gym in Rome with coach Giorgio Marinelli, Giorgio was a professional boxer from 2003 to 2008. In the super lightweight division he became IBF International, IBF/WBA Intercontinental and European Union champion. I have been working with him for the past two months. I train twice a day: in the morning I run for one hour. In the afternoon, I work at the gym for two hours. Since the EBU named me official challenger of European champion Mary Romero, I train every day. I had a job as a dancer, but I quit it to become a full time pro fighter. I studied dance for many years, I danced in clubs and in many music videos, but that job is too stressing for the body of a pro fighter. I made a choice because I want to be successful as a pro fighter.”

Do you have a real passion for boxing?

“Boxing is the only sport that I really love. I entered for the first time in a gym in 2015 and I never stopped boxing.”

“A boxer because I don’t train to knock my opponent out with a single punch. If she gives me an opening, I will get the KO.”

Have you seen videos of Bec Connolly’s fights?

“No, but she fought 13 times in the U.K. where no opponent is easy. I respect her experience and I know that I don’t have to underrate her.”

Do you have a female or male champion as a role model?

“I like a lot Daniele Scardina for what he is doing to help the popularity of boxing in Italy. Interviews for major magazines, the work with his social media, going to Dancing with the stars are useful to make him famous and therefore to make boxing famous. People who never attended a boxing event, now buy the ticket to see Scardina fight. I would like to become as famous as him. I am a dancer and therefore Dancing with the stars would be the perfect tv show for me.”

In the co-main event of the Roma Boxing Night, European Union featherweight champion Mauro Forte (Italy, 16-0-1 with 6 KOs) will put his belt on the line against Francesco Grandelli (Italy, 15-1-1 with 3 KOs) on the 12 rounds distance. In the light heavyweight division, Serhiy Demchenko (Ukraine, 23-15-1 with 15 KO) will fight Hrvoje Sep (Croatia, 10-0 with 8 KOs) on the 6 rounds distance. Also, Italian super welterweight Mirko “Terminator” Natalizi 11-0 with 7 KO) will fight for the IBF International belt. His opponent will be announced shortly. Super lightweight Armando Casamonica (Italy, 3-0) will fight Mauro Loli (Italy, 5-2) on the 6 rounds distance.