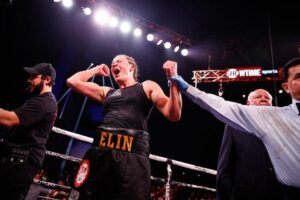 In the most important challenge of her young career, the Swedish Elin Cederroos will defend for the first time the World Boxing Association Super Middleweight belt against the American Franchon Crews-Dezurn at the LoanDepot Park stadium in Miami, United States, next Saturday, June 19th. In addition, the undisputed reign of the division will be at stake in this bout.

Cederroos was crowned 168 lbs. champion in January 2020 against Alicia Napoleon, were both women took a cut as a souvenir. Since that time she has not stepped back into the ring due to pandemic limitations. However, Cederroos has never stopped training while continuing to care for her family as a mother and businesswoman.

In statements made after the fight with Napoleon, the Swedish boxer expressed her dream of becoming the undisputed 168-pound champion. Time came quickly and wishes are to be fulfilled. On June 19, both fighters will defend their belts: the WBA and IBF belts held by Cederroos and the WBC and WBO belts held by “The Diva” from Baltimore, Maryland.

With rich histories to their credit, these two warriors promise a great show at the LoanDepot Park arena. Franchon Crews “La Diva” Dezurn successfully completed her last eight-round fight against Ashleigh Curry. The most outstanding fights in which her sharp boxing skills have stood out have been: her debut against Claressa Shields and the controversial fight against Mexican Alejandra Jimenez. She has a record of 7 wins with 2 knockouts and 1 loss, while Cederroos is undefeated in 8 bouts.