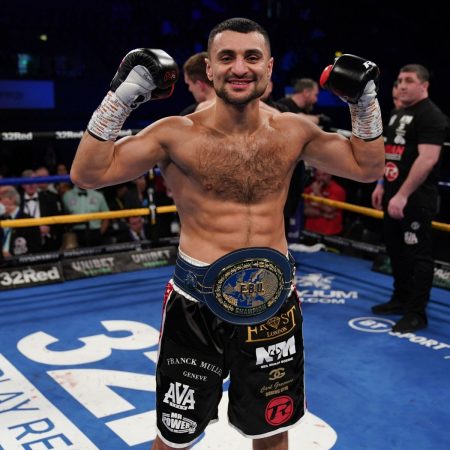 European welterweight champion David Avanesyan made an emphatic statement in a stunning fifth defence of his EBU belt at the OVO Arena, Wembley on Saturday night.

His previously unbeaten opponent Oskari Metz had no answers once Avanesyan got to work and the Finn never recovered from a brutal knockdown and was finally saved from himself by the referee with just two minutes on the clock.

The champion, 24-4-1, will now await a ruling from the WBC – where he is ranked No.2 – over his passage to a shot at the champion Errol Spence jr.

In the co-main event, Hamzah Sheeraz was also making statements and putting down a marker in a new division as he secured the WBC International Silver title with a second round knockout of Jez Smith.

Smith promised to bring the heat but was brutally picked off by the unbeaten Sheeraz, now 15-0 (11 KOs).

A sweet left hook planted Smith on the canvas in round one as Sheeraz asserted authority in his first fight at middleweight. He was down again at the beginning of the second and failed to beat the count just as his trainer Josh Burnham rightly threw in the towel.

Royston Barney-Smith delivered a sparkling performance on debut against Adan Martinez, who was rocked on a number occasions across the first two rounds by the accuracy of Barney-Smith’s punches.

The 18-year-old former two-time European champion as an amateur showed more than enough to suggest he will be one to watch as he progresses through the ranks. He punches clean and hard, doesn’t waste shots and employs plenty of variety in his work.

Martinez was a stubborn and ideal opponent who seemed to view getting through the four rounds as a personal triumph. Referee Lee Every scored the fight 40-36 and Royston Barney-Smith is up and running.

Sam Noakes defended his WBC International Silver lightweight title with a ninth straight stoppage to edge closer to his goal of a perfect 10.

After three one-sided rounds the Italian Vincenzo Finiello was plonked to the canvas in the fourth by a peach of an uppercut that Finiello failed to recover from. Mark Lyson waved it off after 1min 54secs of the round.

The iBox Gym trained youngster started on fire with all his usual spite and swagger and looked like he could be in for an early night, but Tondo responded and started to match fire with fire.

Tondo came back into it across rounds four and five, tagging McCann several times and punishing any indecision on the part of the 21-year-old. The Tanzanian was growing in confidence after weathering the early storm and the pair engaged in a fiery shootout at the end of the sixth when McCann attempted to regain the momentum.

McCann re-established some sort of control in the seventh as Tondo was put under a huge assault and looked, for the first time like he could be on the brink and showing signs of distress.

The Maidstone Menace started to enjoy himself in the final round and was duly declared the victor by a 79-73 scoreline on all three cards.

Mark Chamberlain notched up the biggest win of his career to reach 10-0, forcing the retirement in the corner of Jeff Ofori after five rounds largely dominated by the Waterlooville lightweight.

Chamberlain made all the running and forced Ofori onto the back foot, whether he wanted to be or not. The 23-year-old is now firmly in the picture for significant title action and a win such as this suggests he is the real deal and one to watch at the weight.

Masood Abdulah continued his short reign of terror at super featherweight. His six rounder against
Sandeep Singh Bhatti followed a pattern of the Islington man using the Indian’s face for target practice, but the hardy Bhatti was game as they come and was dangerous with lunging counters.

Abdulah made it four stoppages out of four when referee Mark Lyson had seen Bhatti take more than enough and waved it off after 1min 20sec of the final round.

Henry Turner, the super stylish super lightweight, scored his first stoppage victory to take himself to 7-0, putting Ivan Njesac down in the third before referee Lee Every stepped in to end proceedings after 2 mins 18 secs of the round.

In the opening bouts of the evening, welterweight Khalid Ali made it to 2-0 with a 40-36 points victory over Josue Bendana, with super lightweight hope Sonny Liston Ali clocking up a third win in the professional ranks via a 60-52 margin. His opponent Lee Glover was floored in the first and final round. 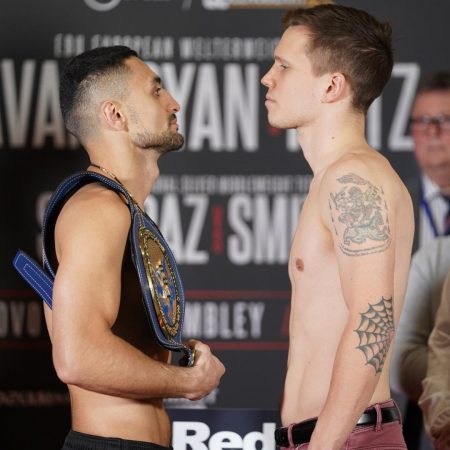 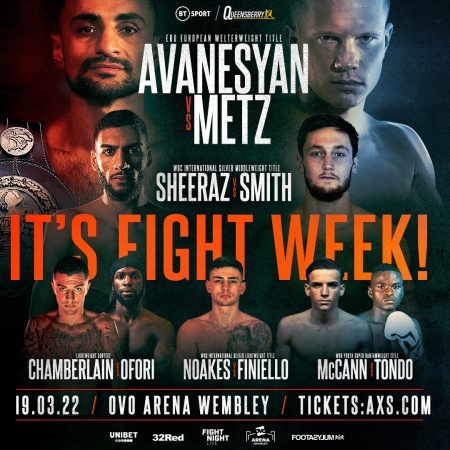 IT IS FIGHT WEEK for the bumper Queensberry card at the OVO Arena, Wembley on Saturday, with European welterweight champion David Avanesyan (28-3-1, 16 KOs) returning to the ring with a defence of his title on a night of multiple championship clashes at the historic London venue. Avanesyan takes on the unbeaten Oskari Metz (15-0, 5 KOs), in what will be a fifth defence of his EBU belt.

An array of the country’s finest young prospects/contenders feature on the card, headed by Hamzah Sheeraz (14-0, 10 KOs), the WBO European super welterweight champion, who will take on Jez Smith (13-4-1, 6 KOs) for the WBC International Silver middleweight title in a fight that is sure to bring fireworks and a tough welcome to a new division.

Thrilling bantamweight star Dennis McCann is entering into title business for the first time. ‘The Menace’ (11-0, 6 KOs) will fight for the WBO Youth world title over eight rounds against Charles Tondo (12-4-2, 5 KOs), a southpaw from Tanzania.

The two leading young lightweights in Britain are also in action at Wembley, with Mark Chamberlain (9-0, 6 KOs) taking on Jeff Ofori (10-3-1, 3 KOs) in a 10-rounder for the first time and Sam Noakes (8-0, 8 KOs) making a first defence of his WBC International Silver title against Vincenzo Finiello (15-4-2, 1 KO).

In four-round action, Khalid Ali (1-0, 1 KO) will look to double his win tally against Josue Bendana (10-22-4, 6 KOs). Finally, Frank Warren gets to unleash his latest young star onto the professional ranks, with two-time European championship gold medallist Royston Barney-Smith, who turned 18 in January, making his pro debut against Adan Martinez (0-2).

A shoulder injury sustained in training last week has unfortunately ruled featherweight favourite Louie Lynn out of this Saturday’s show.

Lynn (10-0) was due to defend his WBC International Silver title against James Beech jr (14-2).

It is further misfortune for the 26-year-old Lynn, who has been out of the ring since September after suffering a nasty gash to his forehead against Amin Jahanzeb, who he overcame on points after the fight was stopped following the ninth round. 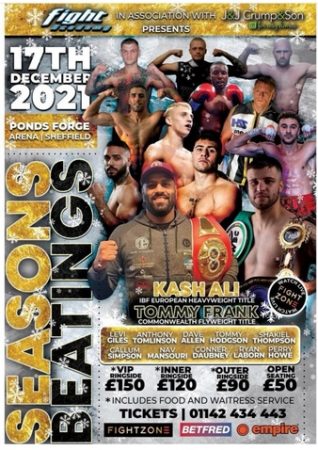 Tommy Frank finishes the year with a solid keep busy win to put the Rosendo Hugo Guarneros defeats further behind him.

Fight Notes: The bout went the full 6 round distance with the referee giving Frank the win via points by a score of 80-73.

Fight Notes: The bout went the full 8 round distance with Giles winning by the referees scorecard of 80-73.

Fight Notes: Aleksandrov was down in round 3 but made the referees count. He was down again at the end of the 4th and last round. He made the count again then the bell rand to end the fight.

With the bout going the distance, it went to the referees scorecard with the winner being Hodgson by a score of 40-34.

Fight Notes: In a very close fight that was fairly even, the referee gave the decision to the Sheffield fighter Tomlinson by a score of 58-57.

Fight Notes: Woolery was down in round 3, he made the count but waved the bout off to save further punishment.