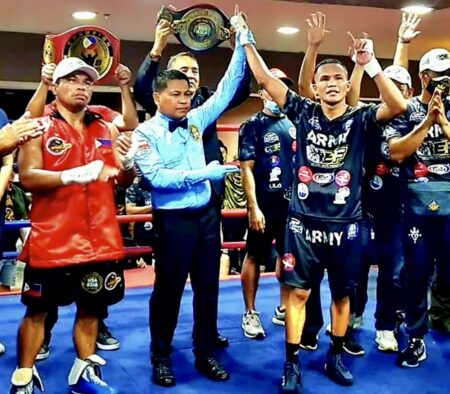 The Philippines’ Charly Suarez world title charge is now looking ominous, with the champion executing his much anticipated title defense, seemingly as a practice run for an audacious IBF belt acquisition in just 6 weeks time.

Utilizing his all-around skills, the Philippines most awarded amateur Suarez kept his unbeaten professional record intact with a lopsided 12-round unanimous decision win over rugged Carlo Magali over the weekend in Sucat, Parañaque.

Suarez was defending the World Boxing Association super-featherweight title and likewise vying for the Philippine crown, and easily got the job done by earning scores of 119-109 (twice) and 118-110 on the judges’ scorecards.

Magali was viewed as Suarez’s most significant test to date, as the defending national champion has a well earned reputation for busting up slick opponents. He ended the career of an unbeaten Commonwealth Games gold medal winner some years back, and more pointedly, sadly ended the life of Australia’s top fighter Davey Browne after a brutal contest in that country.

The crowd at the Flash Grand Ballroom of the Elorde Sports Centre rallied behind Magali, but Suarez had no trouble keeping his foe at bay with shots fired from long range. It was a frustrating night for Magali, who turned out in career best shape, but he was really unable to lay a glove on the quicksilver Suarez.

The victory raised Suarez’s record to 13-0 with seven knockouts, and the Magali conquest put him on line for a quick return to the ring on 10 December in Vietnam. Suarez is looking to quickly rise to the top 10 of the major sanctioning bodies, and will make a formality of adding the IBF belt to his collection when he competes at The Grand Ho Tram Strip in Vietnam on December 10.

“We are fast-tracking his climb to the world ratings,” Suarez’s chief trainer and long time national team pal Delfin Boholst.

Charly’s ripe (for a title shot) because of his age and his wealth of experience (fighting in the amateur ranks),” Boholst added.

Though already 34, Suarez has fought extensively, and once faced Vasyl Lomachenko with an interesting back story.

Called up on only 3 days notice, Suarez declined the initial offer to fight the Ukrainian champ due to having severe injuries to both shoulders. Ultimately, he agreed to help the promoters so that the large scale show could go ahead with their marquee fighter, with Suarez promising to give it his best despite the circumstances.

He performed so well in fact, that he was deluged with offers, including that of Top Rank. However Suarez was forced to reject the promotional attentions, as the severity of his shoulder injuries rendered him unable to fight again for almost two years.

Tellingly, Charly Suarez also has victories over former world champions Oscar Valdez and Joe Cordina when he was competing on the amateur circuit, so he definitely has the pedigree to take his professional game to the highest level.

Is Charly Suarez the best Philippine boxer ever? 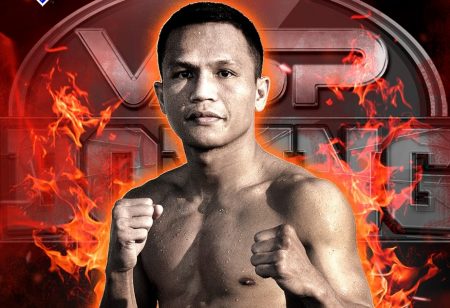 Mark Magsayo was striving for the world #1 spot when he battled unbeaten 35 and 0 Rey Vargas in Texas last weekend. Despite a dramatic fight where Vargas was dropped to the canvas, Magsayo showed significant flaws in his game that resulted in him losing his title, and the Philippines now being without a world champ. Magsayo has historically shown an ability to improve with every new challenge, and it is possibly just a matter of time before this Bohol born talent will rise to the top once more.

But he is not the Philippines lone hope to shine bright on the world stage!

Charly Suarez is without doubt the best and most technical boxer that the Philippines has ever produced (and yes, we are including the iconic Manny Pacquiao) !

He has been the most heralded amateur of the last decade, winning three SEA Games gold, and defeated many of the world’s best including Oscar Valdez. Suarez went on to lose controversially at the Rio Olympics to the outstanding Joe Cordina by Split Decision. This British boxer is now the IBF World champ, after destroying Japan’s Kenichi Ogawa courtesy of a stunning round one knockout. Talks are now in the pipeline for Cordina to face the prodigy Shakur Stevenson, assuming the star doesn’t take the inevitable jump to 135 in the near future.

The “King’s Warrior’s” world title claims were scalable long ago. It is now almost part of folklore that he faced the fabled Vasyl Lomachenko on 5 days notice whilst visibly injured, only to make the champion work overtime to earn a victory. The Philippines’ Suarez was out of the ring for 18 months subsequent to that match, in order to rehabilitate from this extraordinary effort.

Charly Suarez has made an immediate impact in the pro ranks, and it is now obvious, that as successful as he was as an amateur, he’s even better suited to the longer round format. Suarez retains a near impregnable defense, and combined with his high punch count, he has dropped only two rounds in his pro career thus far. He also displays an ability to temper speed and power, and recall them at any time they are required. Above all, Suarez is an incredibly relaxed fighter, and this really comes to the fore for him in 12 round bouts.

This unbeaten fighter has amassed 11 wins (7 KO) in extra quick time, and will be making a WBA regional title defense in Manila on August 7th against Mark John Yap. Yap is one of the better internationally performed pinoy in recent years, having successfully defended OPBF titles on multiple occasions in Japan prior to the pandemic.

The Davao born boxer had detractors when he left the amateurs, but has quickly established himself as the Philippines premier talent. He had 5 bouts during 2021, and he will contest 5 in 2022. This is a fighter that takes very little damage, and like his predecessor Manny Pacquiao, has speed to burn and a petrol tank to go with it.

It is expected that Suarez will have at least two more fights this year after his August 7th WBA title defense, and most likely abroad. The plan is to stay busy, keep winning and defending belts, and maintain the rapid ascent from world #60.

There’s no rest when you are chasing a world title !

What is assured is that it is only a matter of time before the world get to see this phenomenon which is Charly Suarez on a global stage, and when they do, they will get to fall in love with Philippines boxing all over again!