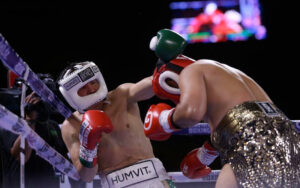 Mexico`s brightest ever Superstar Julio César Chávez, stepped into a ring for the last time and thrilled boxing fans, defying the encroaching years, to dazzle, as only he can.

Pencil slim Julio Sr, showed what he’s made of against a portly Héctor ‘Macho’ Camacho Jr., at the Jalisco stadium in Guadalajara, in 4 exciting rounds.

A step slower and slightly more vulnerable to the right southpaw jab, the Great, Great, Greatest Julio, dug deep and slithers of his magnificence re-emerged from decades past, in technicolour flashes, highlighted by his legendary left hook to the liver.

Camacho responded to the attacks, but mainly dedicated himself to guarding against the blows of the ‘El Gran Campeon’

Canelo even came to the ring, prior to the final round, with the crowd cheering. They were witnessing the torch of Mexican greatness being symbolically on passed.

And in a rematch duel duel, Mexican Ramon “Inocente” Álvarez (28-8-3, 16 KOs) defeated, by unanimous decision in eight rounds, Omar “Businessman” Chávez (38-6-1, 25 KOs). A clash of heads in the fourth opened up a deep cut to the right of Omar’s right eye, masking his face crimson, with the blood leaking down on to his pale chest.

In the sixth, the Referee called time out and the Ring Doctor wiped the blood away, but it wasn’t staunched or stemmed and freely flowed all over again.

Omar remonstrated with her. The bottom line was his instance: “I`m a Chavez…and I’m fighting on!” Thus in defeat he gained admiration. Great sportsmanship, as he went over congratulated and embraced Ramon.

It`s what makes our Boxing so VERY GREAT!

Julio Cesar Chavez In Great Shape For His Grand Finale 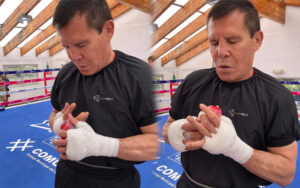 Julio Cesar Chavez intensifies his training sessions preparing for the event on June 19 against Macho Camacho Jr., at the Jalisco Stadium, in an evening that will be special, since Chávez announced that it will be the last exhibition fight that he makes.

“My superstructure is no longer enough, even though I am a person who has a habit of exercising every day, but getting into a ring is totally different,” said Chávez.

But the great Mexican champion wants to leave a lasting impression for his legion of fans in Jalisco. That`s precisely why he has been intensifying training as the fight approaches, as he shares daily developments on his social networks.

On the same card, his son Julio César Chávez Jr will be fighting against former UFC champion Anderson Silva.

Julio César Chavez Will Tussle With Hector Camacho Jr. in an Exhibition 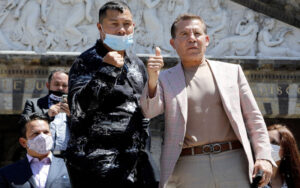 The greatest Mexican champion, Julio César Chávez, will face Hector “Macho” Camacho Jr., in an exhibition duel, as a posthumous tribute to Héctor “Macho” Camacho Sr., on the “Dinastía Chávez” card, which will be held on Saturday, June 19, at the Jalisco Stadium, in the City of Guadalajara, Jalisco, Mexico.

The exhibition fight and the rest of the line-up, which is promoted by Toscano Boxing Promotions, will be televised live by pay-per-view in the United States, Canada and Puerto Rico, through Global Sports Streaming (GSS).

The card will include two of the Chávez legend sons, JC Chávez Junior and Omar Chávez, who return to action with rivals to be announced.

In the presence of the media and boxing fans, Chávez González acknowledged that he had a great friendship and admiration for his great rival, who passed in 2012. A key factor that convinced him to fight the son of “Macho”.

“When they proposed the exhibition with Camacho Jr., I said no, and when they questioned me why, I told them because he was too young for me. But when they told me it was a tribute to Macho Camacho, I accepted. I fought five Puerto Ricans, and the biggest trash talker of them all was Camacho, but he never messed with my family, he never offended me. We were great friends, I have great appreciation for him, but I’m sure he’s going to get angry because of the beating I’m going to give his son,” said JC Chávez.

Likewise, Chávez announced that the exhibition that he will offer in Guadalajara on June 19 will be the last of his career, so he wanted to have his children with him.

“I accepted because it is my last exhibition. My body does not give more, so against Camacho Jr. it will be the last time I get into the ring. That’s why I wanted my children to enjoy that memory.”

Héctor Camacho Junior, the “Machito”, acknowledged that he had been looking for a long time to fight against one of the Chávez clan, and assured that it will be something personal, because he finally found the opportunity he was looking for since that September 12, 1992, when Chávez defeated his father.

“Thank you very much for this opportunity, which I have waited since Chávez beat my father. We are preparing for what is going to happen. I’ve been looking for a fight with a Chávez for about 10 years, and now it’s going to take place in this city, which will be a great fight for all of Latin America. I am going to prepare for an excellent fight, to honor my father.”