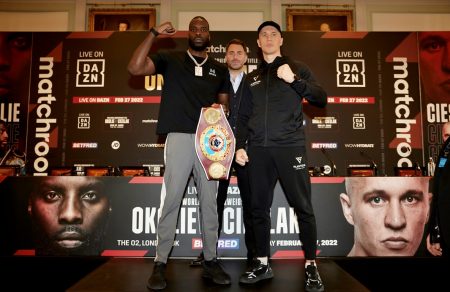 “This young man is an exceptional talent. Galal was the standout British fighter at the Games and we have a long-standing relationship with his brothers, so it was personally very important to me to get this done. Galal is going to do things very differently, for his professional debut at The O2 we are looking for him to challenge for his first professional title and from there move quickly to a World Title which we expect him to win across multiple divisions.”

“Welcome back to everyone at Trinity House here in Trinity Square, London ahead of a big press conference and as you can see from this top table – we’ve rammed everybody on. We’ve got a huge night of boxing at The O2 on Sunday February 27, live on DAZN. Lawrence Okolie will make the second defence on his WBO Cruiserweight World Title against Michal Cieslak. It’s a tremendous fight, two absolute elite Cruiserweights battling for glory on a Sunday night – something completely different at The O2 which for me is the best arena in the country for boxing. It’s going to be a tremendous night. The card is stacked with talent in so many different divisions. So many different fighters at different stages in their careers.”

“I believe on paper this could be one of the hardest fights. Until you actually get in the ring, you never know what someone’s got. Watching Cieslak’s fights, he’s a very good technical boxer. He’s got some power and good speed. All in all, it poses to be a very good challenging fight.

“The main thing for me is that boxing is my true love. It’s my rocket fuel. If I’m not performing in the ring then none of this other stuff happens. So for me I find motivation being able to do a rap song. Being able to collaborate with companies that I’m fans of or supporters of.

“Where I came from, without making it a sob story, to where I am right now it’s a blessing. And I want to hold onto that. My opponent here is to make amends, but I have to make sure that my journey continues in the direction that it’s going and we don’t have any hiccups.

“As soon as a fight is made, Cieslak is the only thing I think of. I’ve got a picture of him in my room. I watched all of his interviews. I don’t understand any of them but I like to watch his mannerisms. I’ve watched all of his fights. I know him and that’s what I focus on. Michael Cieslak. After that, we can talk about everyone else.”

“He’s a very strong fighter and he punches with both hands, he’s very strong physically. I just have to do my work, all the training I’ve done with my coach, that’s what I’m going to bring to the ring.

“If I wasn’t sure I was going to win, I wouldn’t be here, I’ve been training since I was 13 so I’m ready to get the WBO Title.”

“I’m finally here now in the ins and outs of professional boxing. But I’m excited now. It’s been a while, 4-5 years to wait from the Olympic Games. Last year before the Olympics I was thinking, ‘I’ve probably done the wrong thing here’. I had a lot of pressure to go to the Olympics and make sure I did well. I brought a gold medal back and here I am now, ready to fight.

“That gold medal is life-changing. That’s what I plan to do from the start. Obviously it didn’t work out for me in Rio. I’ve seen all the boys turning pro, Lawrence and Fowler, and I thought I would give it another crack. And again that extra one year killed me. I thought, ‘I’m gonna have to wait another year now’. Like I said earlier I was asking if I had done the right thing. And now I have a gold medal and I understand coming from the Olympics I see myself as a better fighter.

“Like I said I didn’t want to start off to too slow, but I didn’t want to go off the deep end or deeper than usual. I’m looking forward to it and I’ll make sure I get the win. And most importantly I want to look good doing it too. Then I can sit back and watch my good friend Lawrence defend his World Title.

“Obviously, my brother was a World Champion at Super-Fly. He lost to Chocolatito, a legend. I’m a big fan of his. I think Chocolatito beats Martinez. I think Martinez is a great fighter, someone I can look to fight down the line if he still at my weight.”

“I’m massively looking forward to getting back out there. Obviously it’s not great for any sportsman to have a bit of an injury and have to take time out of the sport you love. But sometimes prevention is better than the cure. You have to look after yourself.

“I’m planning to have a really big year this year. I want to go into it fresh and make sure that everything is sorted, all ticked off and done. And I can get really sucked in to have a big impactful year this year. And hopefully push onto some more belts.

“I’ve been cruising through the majority of all my opponents. I need to find a place where I can almost take a second and take a little stop. So far, I’ve been cleaning through everyone pretty easily. We need to keep pushing and keep raising that bar. Keep moving on to higher levels until we get to a point where I find an opponent who is in front of me and won’t go in the first round.

“On the back end of my injury, I’ve been testing on my body. I did a few rounds with Chisora and we did some great sparring. In the most recent weeks, I’ve been with Johnny Fisher and a few of the other guys. The little bump on my lip isn’t down to Johnny but I did get a few bruises.”

“I feel like a different fighter, showing my patience and composure where I used to be forcing things and doing too much.

“There was no pressure out and Bilbao. But obviously we don’t want it to stay like that. It’s massively beneficial for me to do shows like this. There’s no going backwards now.

“You know what Eddie, it was crazy when I signed with you. I signed at just 18 and I’m only 19 now. I had a massive year. I think the performances are only getting better so now I can’t wait to go back out to The O2 Arena with a massive platform and do the business again in better fashion.

“I’m in the gym and Johnny Fisher trains with me and we push each other. To be honest Eddie I look at Lawrence and I think I’m gonna be a similar type of build. I can’t see myself ever being like a massive wide fighter. So, I think I’m going to be a lean Cruiserweight. I’m going to fill out and I’ve got a lot of my own strength to work on. The main thing is to not rush it. I’m going to give my body the development time that it needs and fill it naturally. And when it’s time, I’ll move up.”

“It’s a great division. I think a lot of people are being entertained right now. Yeah, I’m looking to move as fast as you’re ready to move me.”

“I’m happy to show the new me. I’m eating for five meals a day now. I have to be strict. I was traveling a lot trying to be a dad and trying to be a professional boxer.

“Like I said my life is to box and I just want to have more proper fights. I don’t want no gimme fights because I’m better now and I’m going to show it. I want to make sure every fight is on a high level.”

“Yeah this is pretty much as big as it gets you know. I’m making my British debut so I’ve got to really make sure that I go out there and put on a big clinic and come away with a nice knockout as well.

“It’s been a wild four months since I left Australia and based myself over here in Essex. Like I said I was with Anthony Joshua and then in Portugal with Dillian Whyte.

“It’s good to come back and get some one-on-one time with Tony Sims you know. Right before my fight in America I spent about two weeks with him and I was just all over the place. I went through about four or five different coaches through the training camps. I think I’ve been with Tony now for about six weeks straight and the progress is starting to show.

“This is going to be a busy year for me. 2022 is about staying active and getting that experience under my belt. 2023 is where I can see the World Title fight coming. As long as I keep winning and keep working hard that’s all I can see.