Muhamed vs. Gashi & Phannarai vs. Hanson results from Germany 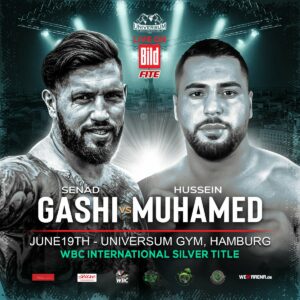 Universum Box-Promotion used to be one of the biggest promotional companies in the late 1990s and 2000s, and among many others, Wladimir and Vitali Klitschko fought their pro debuts for Universum in Hamburg.

Now, after some difficulties over the last year, Universum is back under a new leadership trying to create new champions.

Phannarai and Hanson stole the show in a very entertaining eight-rounder with non-stop action. Both contenders had their moments but finally, it was the faster and technically more skilled Phannarai who managed to outwork hard-hitting Hanson and take home a majority decision win. Judges Robin Dolpierre (France) and Daniel van de Wiele (Belgium) had it 77-75 for Phannarai while Olena Pobyvailo (Belgium) saw the fight as a 76-76 draw.

“It is an unbelievable feeling to have won my first WBC title”, said Phannarai after the bout. “Cheyenne fought a great fight and I felt that I had to leave everything in the ring to defeat her. I cannot say how proud and happy I am. I will never forget this night.”

In the heavyweight bout, unbeaten prospect Muhamed used his size, strength and reach advantage to keep brave Gashi in the right distance. 6’0” Gashi, a natural cruiserweight, had taken the fight on short notice when Cuba’s Jose Larduet who was scheduled to face Muhamed was forced out of the fight by Covid. Gashi tried to confuse his opponents by switching his stance every now and then but Muhamed kept the focus and landed some clean and hard shots.

In the second round, Gashi jumped in for an attack but got caught off balance with a counter shot which sent him to the canvas for a knockdown. In round five, Gashi initiated a wild exchange of punches which sent him to the floor for a second time after being caught off balance again. With the two 10-8 rounds on his side, Muhamed took home a deserved unanimous decision victory. Scores were 97-91, 96-92 and 95-93.

“Hussein did a good job”, said manager Ahmet Oener. “He has improved a lot. And fights like this make him even stronger. Gashi showed a lot of heart but Hussein did well and was always in control. Now we are looking forward to taking the next step.”