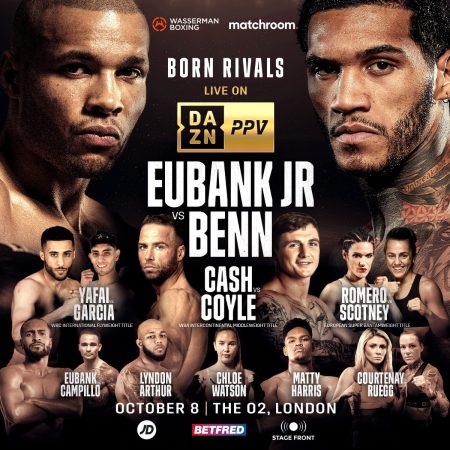 Matchroom and Wasserman stars make up the undercard when ‘Born Rivals’ Chris Eubank Jr. and Conor Benn clash on a sold-out blockbuster night of action at The O2 in London on Saturday October 8, exclusively live on DAZN around the world and on DAZN PPV in the UK and Ireland.

Olympic gold medal star Galal Yafai will defend his WBC International Flyweight title against Gohan Rodriguez Garcia. Yafai (2-0 2 KOs) has made an impressive start to life in the paid ranks following his golden trip to the 2020 Tokyo games, winning the title he puts on the line on his debut at the North Greenwich venue in February, and successfully defending it with a second round KO win at Madison Square Garden in April. The Birmingham ace now meets Mexican Garcia (12-1-1 1 KO) in his second defence of his title, with the 21 year old challenger fighting outside of his homeland for the first time in his second title fight, having landed the International Silver title in April 2021.

Light-Heavyweight star Lyndon Arthur is back out in quick succession following his return to action after headlining in September. Arthur (20-1 14 KOs) stopped Walter Sequeira in bullyish fashion when he got the win inside six rounds at The University of Bolton Stadium earlier this month, and the former Commonwealth champion will look to swiftly put his name back where it belongs and return to title action.

World rated Middleweight Felix Cash continues his hunt for World title honours as he meets the unbeaten Connor Coyle for the WBA Intercontinental title. Undefeated Cash (15-0 10 KOs) got through a gut-check in his last outing against dangerman Magomed Madiev at Alexandra Palace in February, and the former British and Commonwealth champion, ranked number four with the WBO and number 10 with the IBF, will look to enter the top ten in the WBA with victory. Coyle (17-0 7 KOs) will have other ideas though, and the Florida-based Irishman, ranked number ten to Cash’s number 12 ranking with the WBA, will be out to ruin Cash’s plans and make a name for himself in his first fight in England.

It’s a family affair for Harlem Eubank, who fights on the undercard of his older cousin Chris Jr and meets Spaniard David Martin over six rounds. Eubank (15-0 6 KOs) has made the Super-Lightweight division stand up and take notice with eye-catching performances of late, notably his stunning one-punch KO of Sean ‘Masher’ Dodd in May at The Indigo at The O2, after forcing Viorel Simion to retire after five rounds of a scheduled eight in Cardiff. Not to forget his most recent win over Eliot Chavez in July where Eubank outclassed and frustrated the dangerous Mexican opponent into illegal punches, forcing a disqualification win to be awarded.

Ellie Scotney hunts for another title as she challenges Mary Romero for the European Super-Bantamweight title. Scotney (5-0) landed the WBA Intercontinental title in February at Alexandra Palace and successfully defended that strap at The O2 in May – beating former World champions Jorgelina Guanini and Maria Cecilia Roman in those bouts. The next strap in her sights proudly belongs to Romero (8-2 2 KOs) who puts the belt on the line for the third time. The Spaniard picked up the vacant belt on home turf in January 2020 and then successfully defended it against Amy Timlin in Barcelona in September 2021 and most recently against Maria Cecchi in Milan, Italy in May and now fights in England for the first time in a clash that should move the winner into World title contention.

Big hitting Heavyweight ‘Magic’ Matty Harris is on the hunt for a third first round KO win in a row and will take on Chris Healey over six. Harris (3-0 2 KOs) put Mait Metsis away in the opening session of their fight in Newcastle in April and repeated that trick two months later in Liverpool against Pawel Strykowski. Standing in the way of the Coventry man’s hat-trick is Healey (9-12 2 KOs), the Stockport stalwart who has already tested the rising ambitions of Fabio Wardley and David Adeleye this year.

Shannon Courtenay makes a welcome return to the ring against Gemma Ruegg. Courtenay (7-2 3 KOs) will step through the ropes just one day shy of her last action in Liverpool, where Jamie Mitchell picked up Courtenay’s WBA World Bantamweight title via majority decision after the Brit failed to make the weight. ‘The Baby-Faced Assassin’ is aiming to get right back into the mix to become a two-time World ruler, and that starts with her return against Ruegg (5-4 1 KO), the Bournemouth fighter who like Courtenay, also fights for the tenth time in her pro career.

Former Team GB talent Chloe Watson completes the line-up, with the Flyweight talent taking on former World champion Nancy Franco in a six rounder. Watson (3-0) returns to the capital where she made her debut at York Hall in November and is looking for win number four in the paid ranks after winning on home soil in Merseyside in June in her first six rounder against Fara El Bousairi. The Birkenhead boxer, who trains under the former Light-Welterweight and Welterweight world champion Ricky Hatton, faces a real step up in the form of Franco (19-17-2 KOs), the vastly experienced Mexican who has held the World title at Minimumweight and challenged at Light-Flyweight.

“We’re just over a fortnight away from ‘Born Rivals’ and one of British boxing’s most monumental moments in the sport. A rivalry reignited by two fighters who are ready to settle the family business and find themselves under the spotlight of global boxing, and we have the perfect card to suit such an occasion,” said Kalle Sauerland, Wasserman’s Head of Global Boxing. “A world class event demands a card that matches the hype and, whilst we’re settling the biggest rivalry in boxing history, we have always allowed stars to break out and raise their stock on massive platforms. We’re almost there, the countdown begins!”

“We have built a stacked night of action at The O2, building up to an historic main event,” said Eddie Hearn. “There’s a great mix of rising stars and established names looking to enhance their claims for World title action. The atmosphere is going to be electric on a sold-out night in London, so this is a golden opportunity for these fighters to make a name for themselves before we witness an explosive new chapter in a classic British rivalry.”

17:00 BST FIRST FIGHT LIVE ON BEFORE THE BELL 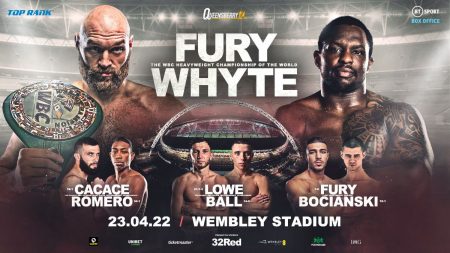 On the same day that undercard was unveiled for Tyson Fury’s WBC/Lineal/Ring Magazine Heavyweight Championship of the World collision with challenger Dillian Whyte on Saturday, April 23, it was confirmed that 4,000 additional tickets now set to go on sale at midday tomorrow from Ticketmaster making Fury-Whyte the record-breaking sporting event to be held at Wembley Stadium connected by EE.

The supporting cast at the national stadium is headed up by a return to the ring for the British junior lightweight champion, Anthony “The Apache” Cacace.

Cacace (19-1, 7 KOs) stepping up in class after making a successful first defense of his title against Lyon Woodstock in August of last year. The Belfast native will fight for the vacant WBO International title in a 10-rounder against Colombia native Jonathan Romero (34-1, 19 KOs), a former IBF junior featherweight world champion.

In a 12-round domestic duel where fireworks are guaranteed, the vacant WBC Silver featherweight title will be on the line when Tyson Fury comrade Isaac Lowe (23-1-3, 6 KOs) takes on undefeated Liverpool native Nick Ball (14-0, 7 KOs).

The winner of this prestigious belt will be catapulted into the WBC world rankings.

Ladbroke Grove’s young heavyweight star David Adeleye (8-0, 7 KOs) will clock up his ninth fight and his second eight-rounder as a professional against Stockport’s Chris Healey as he closes in on title contention.

Before the pay-per-view telecast begins, Top-Rank signed Irish Olympian Kurt Walker (1-0, 1 KO) will compete in a four-round featherweight bout against an opponent to be named.

Frank Warren, who is promoting the show in association with Bob Arum’s Top Rank, said: “I am delighted to finally be able to reveal what will be a competitive undercard in support of the big one that we have all been waiting for.

“I genuinely believe that as soon as Anthony Cacace gathers some momentum in his career, he has got what it takes to win a world title and securing the WBO International belt will put him firmly on track. But he is up against a dangerous and experienced opponent in Jonathan Romero and will need to be at his very best on the night.

“I am so looking forward to seeing our man Nick Ball get the chance to really announce himself on the big stage against Tyson’s sidekick, Isaac Lowe, and it should be a cracking fight. The WBC Silver title on the line will propel the winner right into the world mix at featherweight.

“Big David Adeleye, a regular sparring partner for Tyson, will add the heavyweight theme of the night and will relish the big stage.

“I am delighted that Tommy Fury will get to share some of the spotlight with his big brother after missing out on his big fight last year through illness. If Tommy keeps on winning and continues to shine, his big opportunities will soon follow.

“I would also like to welcome Kurt Walker, the Irish Olympian signed to Top Rank, onto the card.”

In addition to the undercard unveiling, it has been confirmed that Fury-Whyte will now be witnessed in person by 94,000 fans following the granting of an additional 4,000 tickets by the local authority.

Brent Council has now approved a further 4,000 tickets to be available as coach packages which go on sale at noon on Wednesday, 6th April exclusively from Ticketmaster.

The 90,000 would have already been a record attendance for boxing but, such was the demand, Queensberry Promotions and Top Rank, along with our hosts Wembley Stadium, sought permission from Brent Council to increase capacity to the biggest seen at a sports event at the national stadium since it was rebuilt in 2007.

An original 85,000 tickets were snapped up in a matter of three hours after going on sale, followed a week later by the initial additional 5,000 tickets also sold in conjunction with coach travel.

Hall of Fame promoter Frank Warren, who is staging the event in association with Top Rank, commented: “I am delighted we are now able to provide four thousand extra tickets for fans to watch the biggest boxing event staged in this country. I know this in no way gets near to meeting the huge demand, but we were determined to have as many fans as possible attend Tyson Fury’s big homecoming fight.

“I would like to extend my thanks to Brent Council for making this possible, along with our event partners at Wembley Stadium, and on April 23 Wembley and the borough of Brent will be beamed across the world.”