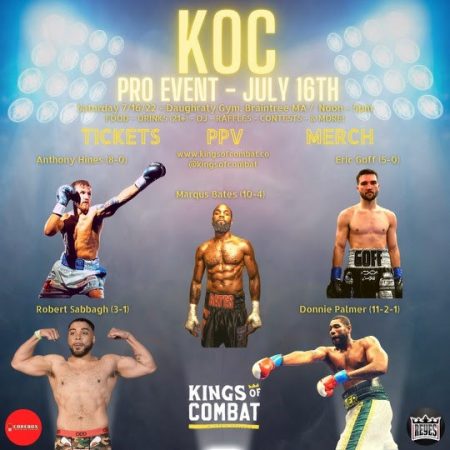 Reyes Boxing Promotions will promote two events under one roof Saturday, July 16 at the Daughraty Gym in Braintree, MA.

This unique evening of entertainment features a professional boxing card headlined by popular heavyweight Donnie Palmer of Dorchester, MA. The 6’10 280 pound Palmer has an excellent record of 11-2-1 with 9 KO wins by knockout. The Army Vet and congressional candidate won five of his last six bouts with his only setback in that period coming against undefeated top 10 heavyweight Joe Joyce.

Palmer will face an opponent to be named in a six rounder.

Tickets from $50 are on sale at KingsofCombat.Co and doors for the pro boxing portion of the event open at 6 pm with the first bell scheduled for 7.

Junior welterweight Marqus Bates is slated to appear an eight round contest. Born and raised in Taunton, MA, Bates is 10-4 with 7 KO’s. In his most recent bout, he stopped Agustine Mauras in four rounds. Bates’ opponent will be announced shortly.

Four-time New England Golden Gloves Champion Casey James Streeter of Portland, ME is facing an opponent to be named in a six round junior middleweight tilt. Streeter, 10-2-1 (4 KO’s), looks to rebound from a defeat in his last fight but is known for his resiliency.

In 2018, Streeter was working as an arborist and attempting to move a tree that fell. His co-worker was operating a grappler machine but didn’t see him and accidentally closed the machine claw on Streeter’s right leg. His leg was mangled, kneecap shattered and femur tore through his skin. Streeter’s femoral artery was 1/8th of an inch from being severed, which could’ve potentially led to him bleeding to death. After four operations, Streeter miraculously recovered and returned to the ring in 2019.

Junior welterweight Eric Goff of Springfield, MA will meet an opponent to be named over four rounds. The popular and unbeaten 22-year-old is 5-0 with 3 wins by knockout.

Prior to the pro card, Reyes Boxing in association with Kings of Combat will host a special card featuring exhibition bouts. The exhibitions start at 1 pm and doors open at noon.

All exhibition bouts are scheduled for three 3-minute rounds. Every participant must pass the same pre-fight medicals as the pro fighters. The exhibitions will have a referee, judges, and medical personnel on site throughout the event.

Brandon Kelly, best known as “The American Ninja Warrior,” faces an opponent to be named in a lightweight contest, heavyweight Rob “One Eyed Wolf” Perez challenges Andrew “The Flesh Hammer” Felt and female welterweight Kacey “Hotwheelz” Wheeler will face an opponent to be announced.

“This is going to be a really fun event and full day of entertainment,” said Michael Reyes, CEO of Reyes Boxing Promotions. “I’d like to thank the Kings of Combat for their role in making this happen and look forward to seeing everybody on July 16.”

Additional exhibitions will be announced shortly.

Tickets for the exhibition bouts are $30 and on sale at Kingsofcombat.co.

Those unable to attend the event can purchase the telecast of both the pro card and exhibitions at Kingsofcombat.co for $20. 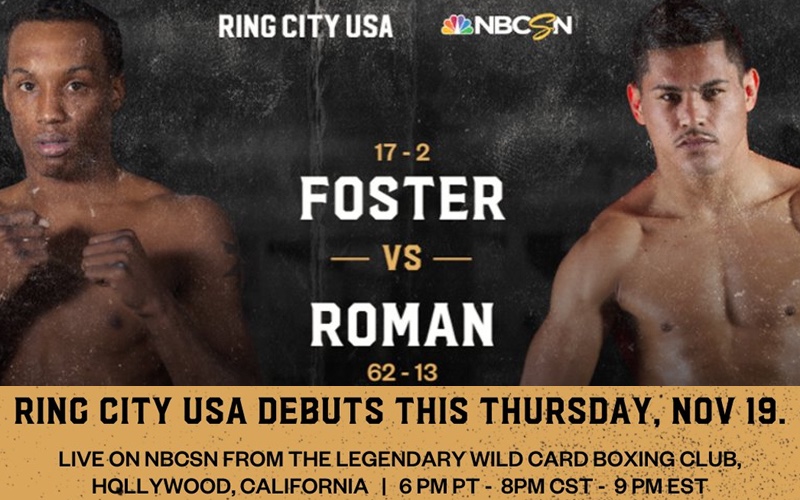 “I’ve got “Ice Water” in my veins and I’m here to shock the world and show that I’m here to stay,” Foster stated.

“We defeated our first opponent of fight week—the scale. We look forward to Thursday night when we will win the fight” Roman stated.