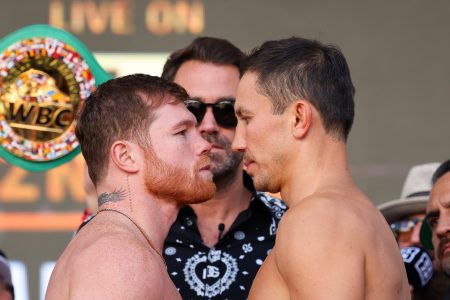 Tonight’s huge fight is at the T-Mobile Arena and at stake will be the undisputed title of the 168 pounds of Saúl “Canelo” Álvarez.

“Canelo” and “GGG” tied in their first duel held in September 2017. The following year, also in September, the Mexican managed to snatch the middleweight crowns from GGG. 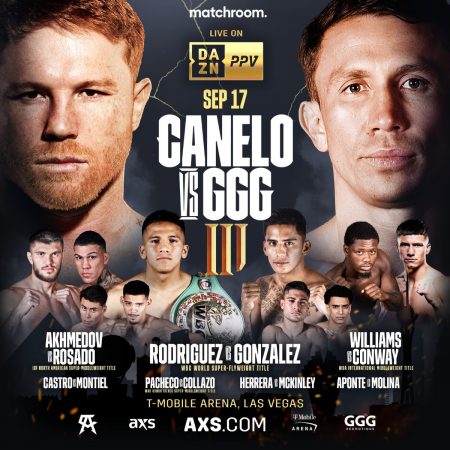 Marc Castro, Aaron Aponte and Anthony Herrera will all take the latest steps in their pro journeys on the biggest stage of all as they complete the undercard to the trilogy clash between Saul ‘Canelo’ Alvarez and Gennadiy ‘GGG’ Golovkin. The event, presented by Matchroom, Canelo Promotions and GGG Promotions, will broadcast live on DAZN Pay-Per-View in the U.S. and Canada as well as around the world on DAZN (excluding Mexico, Latin America, and Kazakhstan)​.

Castro (7-0 5 KOs) appears on his fifth Canelo undercard since making his debut in December 2020, and the former amateur standout will meet Kevin Montiel Mendoza in his first bout over eight rounds. Castro steps through the ropes for the third time this year with a pair of points wins over six rounds already in the bag and will be tested by Mexican Mendoza (6-1-2 3 KOs) whose CV includes a split-draw with Otha Jones III.

Aponte (6-0 2 KOs) is also lacing them up for the third time in 2022, and ‘The Alien King’ is ready to mix it up against Canelo Promotions’ unbeaten prospect Fernando Molina. Aponte, who penned a promotional deal with Eddie Hearn in January, will look to add a seventh win in the paid ranks in his first eight round round clash with Molina (8-0 3 KOs), the 20 year old Mexican who also has a pair of wins over six this year.

Herrera (2-0-1 2 KOs) gets the chance to bounce back to winning ways on the biggest stage as he takes on Delvin McKinley. Herrera was held to a draw in his last outing in Mexico against the spirited Kennyn Valenzuela, and the Manny Robles trained talent is eager to get back on track in Sin City. McKinley (4-3-1 4 KOs) will have other ideas though, and the 26 year old comes into the bout having taken Olympic bronze medal man Nico Hernandez the distance earlier this month.

Fireworks are promised as Ali Akhmedov and Gabriel Rosado will clash for the IBF North American Super-Middleweight title, Diego Pacheco fights for his first pro belt when he meets Enrique Collazo for the WBC USNBC Silver Super-Middleweight title and Austin ‘Ammo’ Williams taking on Kieron Conway for the vacant WBA International Middleweight title, all leading into the third installment of the classic modern rivalry between Canelo and Golovkin, with the Mexican king putting his undisputed Super-Middleweight crown on the line against Kazakhstan’s reigning WBA and IBF Middleweight ruler in the most anticipated match up of 2022.

“This is a great opportunity for three talented young men to strut their stuff on the biggest stage of all,” said Hearn. “Marc, Aaron and Anthony will be soaking up the packed build-up and buzzing fight week in Las Vegas before putting their skills on display as part of a brilliant card on September 17 that is full of great fighters and clashes that promise drama, before we hit a main event that the world will stand still for.”