Lara vs. Warrington ends as a technical draw & results from Leeds, UK 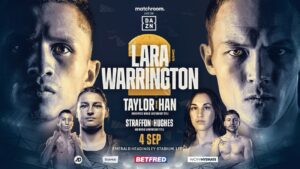 Fight Notes: After repeated head-butts from Warrington, a nasty cut opened up on Lara’s eyelid. The doctor advised in-between round 2 and 3 that Lara could not continue, and as 4 rounds had not been completed, the result was a technical draw. If 4 rounds had been completed, it would have gone to the judges scorecards. This was not to be.

Hopefully they can do it for a third bout.

Fight Notes: The bout went the 10 round distance with Taylor winning every round with the score 100-89 x3. Taylor was credited for a knock down in round 8, but on replay you could see Han was off balance with Taylors head coming underneath Han’s shoulder.

It was a frustrating night for Taylor in a scrappy affair with Han making it difficult for Taylor to land clean.

Fight Notes: Benn looked much improved in this bout and probably learned more from this than all the others combined. Benn was the stronger, harder puncher and quicker, even though it never looked like he was going to knock out Granados.

At times, it appeared that Granados had more to give, showing glimpses of being able to connect on Benn. He didn’t, and seemed happy to make it through to the final bell.

Fight Notes: Maxi Hughes put on a boxing display and was punch perfect in beating Straffon. In round 5, Straffon was nearly stopped as Hughes had him going with the referee close to stopping the bout. He got through the crisis but was beaten round after round.

Fight Notes: After Bridges starting well, she lowered her workrate as Gangloff came into the fight. Gangloff seemed to have done enough to win the decision but yet again, another odd decision. Referee Steve Grey’s scorecard was 77-76 in favour of Bridges. The DAZN commentary team had Gangloff the winner as well.

Fight Notes: Hussain was down at the end of the 1st round and in the 2nd round. Referee waved the fight off at the time of 2:33 of the 2nd round.

Fight Notes: The bout went the 6 round distance with Bateson winning on points. Referee Mark Lyson scored the bout 58-56.

Conor Benn and Adrian Granados cleared the scales in Leeds, England, on Friday and are now ready to enter the ring to fight for the World Boxing Association (WBA) Continental welterweight title.

Both the champion Benn and Granados weighed in at 146.5 pounds, both under the 147 limit required by the division, and this Saturday they will feature in one of the most interesting fights of the Matchroom Boxing event, in which Katie Taylor will also be defending all her crowns against Jennifer Han.
Benn will be making the fifth defense of his belt against an experienced opponent and the fight is a great test for the 24-year-old British prospect.

Granados wants to prove that he still has the punch to go toe-to-toe with the best. He has faced some great opponents in his career and wants to upset a younger and highly regarded opponent like Benn.

The British fighter is undefeated in 18 fights, with 12 of them by knockout and the Mexican has 21 wins, 8 losses, 3 draws and 15 knockouts.

Maxi Hughes and Jack Bateson weigh in ahead of tomorrow night

Maxi Hughes and Jack Bateson were both ripped and ready on the scales as they weighed in ahead of their respective fights on tomorrow night’s huge event at Headingley Stadium.

The weigh-in took place on Friday, with Hughes weighing in at 134.25lbs ahead of his title challenge, with defending champion Straffon was identical, also weighing 134.25lbs.

Bateson was also in tremendous shape for his return to the ring, coming in at 124lbs, while Garcia was slightly lighter as he weighed 123lbs.

Maxi Hughes and Jack Bateson were both in good spirits as they spoke to the media at the final press conference ahead of this weekend’s huge event.

The final press conference took place on Thursday, and Hughes, Straffon, Bateson and Garcia all made their intentions perfectly clear ahead of fight night.

Hughes said: “I’m grateful for the opportunity. I’ve worked hard and been in the professional game 11 years, but believe I am just getting started. Whoever is the oldest world champion, I want to break that record.

“I’m the Cinderella man, and that was clear when my Mrs said to me that before I go out of this house that it needs cleaning! I’ve been cleaning the house, but when I go to the ball on Saturday I’ll have two glass slippers on.

“I have the experience, I’m older, and wiser. You can’t buy, beg, borrow or steal experience. When you’ve been doing it as long as I have, I’ve been around some top domestic opposition, and it’s led me to where I am.

“It’s a cliché saying everything happens for a reason, but every fight I’ve taken and not got the decision has led me to this. Now is the time to capitalise and reap the rewards and put my name up there in the top 10 across the sanctioning bodies.

“Josh Warrington has been a great world champion, and not only did he win the world title, he defended it in great fashion. I just look at what he’s doing in the gym and copy it.

“We get on well as well aside from boxing, and it’s brilliant to be bouncing off each other in the gym. We help each other and it’s been great to share camp with him.

“Straffon is a tough opponent, and even if we didn’t see the Tennyson fight and we got to fight him, you just have look at his record and see he’s heavy handed, so let’s not test it and stand and trade.”

Straffon said: “Thanks for the welcome, it’s great to be back here in England. This is not a fight between Mexico and the UK, it’s just between me and my opponent in the ring. I have the hunger in these fights, and I look at it as if this belt was vacant.

“Any fighter in front of me is a block in the road and I have to take it away. It’s like they’re a thief taking money from my family. I come to fight, and I hope he will as well.

“I’m not overlooking Maxi in this instance. It is dangerous when fighters do that. On Saturday you can be assured we will be shouting Viva Mexico!”

Bateson said: “I’m buzzing to be back here in Leeds with a crowd, and I’m looking to shine. This won’t be the last time I’m on one of these big cards and I’m looking forward to it.

“I’ve known Josh Warrington since we were young kids growing up. I want to be where he is now. He’s set the way and paved the path, and I’m  sure that one day if I keep working hard, I can be where he is and doing it for the city.”

Garcia said: “Thanks to Matchroom for the opportunity to be here. I’ve prepared extremely hard and you’ll hopefully see the best of me on Saturday.” 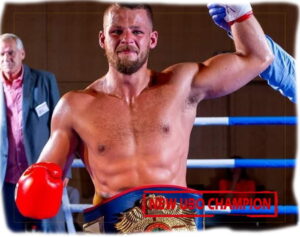 Stanislav “Bull” Eschner had home-advantage, and was considered the A-side for a change, but it was not meant to be for the rugged Czech on Saturday night, July 10. 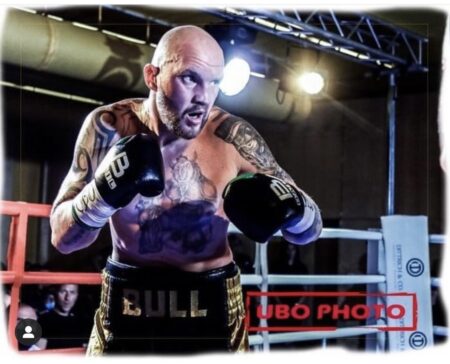 Eschner had by far faced the better opposition coming in, and had fared well in losing efforts against some top names, but Jurko was undaunted and shocked the local crown by scoring a fifth round knockout.

The new UBO Champion, taking part in his first title fight, improved his professional record to 7-2 (5) after a career-best performance. Eschner drops to 14-16-1 (7).

The show was promoted by former European and WBO World Champion Lukas Konecny.