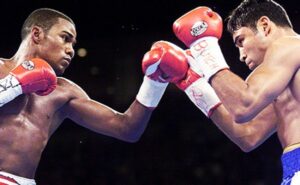 Kelly Pavlik and Felix Trinidad were among the 2021 class of inductees into the Atlantic City Hall of Fame last weekend thanks to their great fights in the city and their influence within a community that lives and breathes boxing.

The Atlantic City Hall of Fame was created by Ray McCline, a former boxing coach at the Pleasantville Recreation Center, who had the idea on his mind for years and was convinced by his wife to make that wish come true for the city and the great fights that have taken place there.

Pavlik made four fights in the city located on the New Jersey shore among which his victory over Jermain Taylor on September 27, 2007, arguably the most important of his career.

“Atlantic City is where it all happened for me. Some of it was good and some was bad, but the good definitely outweighed the bad. And my fans were there to see it all,” the American assured in a note written by the Atlantic City Weekly last week.

Pavlik was joined by Trinidad, a legend of the sport who was accompanied by the famous salsa singer Victor Manuelle, who sang the national anthem of Puerto Rico at the ceremony.

The ceremony was also held for the class of 2020, whose induction could not be held last year due to Covid-19.
On that list were fighters Riddick Bosé, Ernest Bing, Al Cole, Calvin Grove, Pernell Whitaker and Tony Thornton. In the trainers, they included Percy Richardson and Tommy Paris, publicist Marc Abrams, manager Laoma Byrd, Murad Muhammad of the IBF, promoter Ron Katz and famed broadcaster Al Bernstein.

The WBA congratulates all of the inductees and celebrates another step toward greatness in their careers.