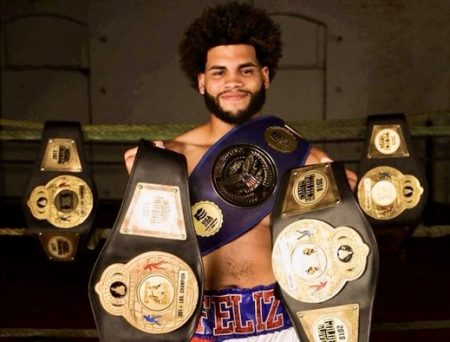 Looking markedly more relaxed than in his pro debut last November and fighting on promoter Joseph Samara’s BlackSheep Promotions event at the Tennis Center in Delray Beach, Florida, Feliz landed his fast punches at will against the badly outgunned Billingsly.

A powerful right hook/left hook combination put Billingsly in a daze and a follow-up barrage convinced Referee Samuel Burgos he had seen enough. The official time was 1:13.

“I felt amazing in there. I felt like it was a perfect performance,” said a happy Feliz, post-fight. “This time I wanted to let my hands go and show my speed. I felt like last time I was thinking too much. It was my first fight, so I was being extra careful. Today I wanted to show my hand speed and it worked out perfectly.”

A former USA National Amateur Champion and #1 amateur super heavyweight, the colorful 25-year-old says he and father/trainer Fernely Sr. will next be looking for him to gain some size to compete in the big man’s division.

“I’m weighing in at 215, so I want to put on some more weight,” Feliz explained. “Skill wise, I’m always learning, but I want some more muscle. I wasn’t feeling the strength of my last opponent, but when I start fighting the really bigger guys, it could be a different story if I don’t gain some size.”

“I thought he looked phenomenal,” said Feliz’s promoter, Gino Limeri from Bulldog Promotions of the fight. “I can already see improvement from the first fight. We want to keep him active, so stayed tuned as you will see him again very soon.”

“Jr. is coming into himself,” added manager, Steven Heid The hard work and great sparring he got with Luis “King Kong” Ortiz is already paying dividends. I see can see his confidence building. I’m telling you right now, this kid is like a freight train steaming down the tracks and anyone that steps in front of this train is going to get run over!”