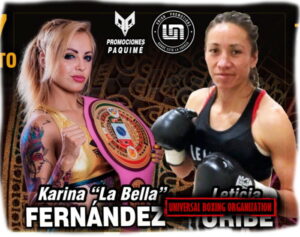 But due to circumstances outside their control, Union Promotions have now partnered with Promociones Paquime and moved the fight to August 27 at the Civic Center in Ascension, Chihuahua.

And the former WBA world title-challenger (14-6-1, 3 KOs) can also look forward to a tougher foe, as she will now face Leticia Uribe, who despite a 6-17 record has proven game and durable against some of the worlds best.

Karina Fernandez lost a close decision for the WBA World Super Flyweight title in 2017 to Linda Laura Lecca, and has since been working to put herself in position for another shot at world honours.

Last time out, this past March, she dropped a decision to Mexican icon, and five-time world champion, Jackie Nava, but defeating Uribe and winning the UBO title will again put her on track.

It may be a new date, new venue and a new opponent, but the goal remains the same for Fernandez. And, only 30 years old, she still has ambitions to become world champion.

The show, including full undercard, will be broadcast live world-wide via the Facebook pages of Union Promotions and Promociones Paquime. 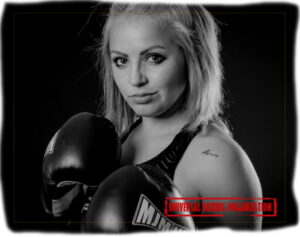 Fernandez (30) has proved in the past that she is world class, as she lost a close decision in Peru to Linda Laura Lecca for the WBA World Super Flyweight title in 2017.

In her most recent outing, this past March, she came up short on the scorecards against Mexican icon, and five-time world champion, Jackie Nava.

Now she is ready to show her fans that she has a lot more to offer by winning the UBO International title, and potentially get in line to challenge for another world championship.

Her opponent will be Irasema “La Guera” Rayas (3-6-1, 2 KOs), who despite her modest record has mixed in good competition.

Last time out the 31-year-old from Monterrey was stopped in four rounds by reigning WBC world champion Yamileth Mercado, albeit in a non-title fight.

While a clear underdog going in. she too will be highly motivated to prove her worth in what will be her first title opportunity.