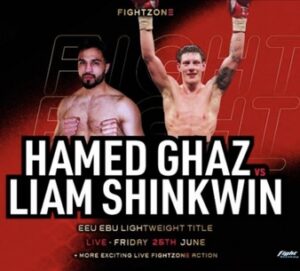 Fight Notes: Ghaz took the 1st round landing consistently with the jab, but generally, a competitive start from both. Round 2 saw it for Ghaz as he landed combinations to both the head and the body, tagging Shinkwin repeatedly. Round 3 saw it one-way traffic as Ghaz was unloading on Shinkwin until the referee stopped in to stop the bout.

Time of referee Darren Sarginson’s stoppage was 2:12 of the 3rd round. Ghaz is now in line for the English Lightweight title.

Fight Notes: In a fight that was between two former kick-boxers, the 1st round saw Deniz take the round with the sharper punches against the bigger Pikkur. Round 2, Deniz clearly took the round on the front foot, over eager but landing. Round 3 saw Deniz work the body more effectively and landed well with Pikkur trapped in the corner. Pikkur showed great resistance but with a stoppage seemingly soon, he fired back late in the round to at least keep himself in the fight. Round 4 saw Pikkur fighting to survive in a brave display with the referee finally halting the bout with Pikkur landing with both hands. Good stoppage from referee Andy Brook.

Time of the referees stoppage was 2:05 of the 4th round for an exciting pro debut. The “Turkish Tyson” Deniz will for sure become an exciting fan favourite from a fighter that is just twenty years of age. In an interview afterwards, Pikkur confirmed he will be moving down to light heavyweight.

Fight Notes: Levi took the 1st round with aggression and effective punches on the front foot. More of the same for round 2 with Levy in full control. In round 3, an exchange from both fighters saw Levy seemingly more effected by the punches that were landed. With this taking place, Mezei became more aggressive that possibly gave her the 3rd round as it was her turn to be the aggressor. The 4th round saw Mezei showboating but the effective and cleaner work came from Levy.

The bout went the 4 round distance, with referee Darren Sarginson’s score card reading 40-37 in favour of Levy. This bout was a rematch, Levy now winning both bouts against Mezei.

Fight Notes: Shahid takes the 1st round, getting the best of any exchanges taking place. Shahid tuned up the pressure in round 2, with Maguire firing back with Ali seemingly slowing down and losing gas. Maguire took round 3 with Shahid very tired with Maguire now on the front foot. The last round brought toe-to-toe action with both very tired with what was now war of attrition.

The bout went the 4 round distance with referee Andy Brook’s score card of 39-37, giving Maguire his first pro win.

Fight Notes: Showing great defensive movement from Ali, Hunt took the 1st round on the front foot. Ali tried a few times to fire back but generally missing, Hunt took the round with some crisp punches. The pattern for the fight was set at that point. More of the same came in the 3rd round with Ali intent on defense and lasting the 6 round distance. The 5th round saw it go back to the pattern of the first three rounds. The final round saw punch of the fight as Ali caught Hunt, as did a number of punches with Ali being more aggressive.

The bout went the 6 round distance with referee Darren Sarginson scoring it 60-55 in favour of Hunt. It was a good learning experience for Hunt who had former world champion Junior Witter in his corner.

Fight Notes: In a hard to score bout, referee Andy Brook scored the bout 39-37 in favour of Miles. Cook appeared too defensive in the bout with Miles seemingly wanting it more. This showed with Miles being on the front foot and with the win, he won his pro debut. The 4th round saw Ali throwing more wild swings with some connecting for a busier round from both.

Fight Notes: In a scrappy bout, it went the 4 round scheduled distance. Referee Darren Sarginson scored the bout 40-36 for a Underwood Hughes points victory. The score did not reflect the competitive rounds but regardless, it was a clear Underwood victory.

Fight Notes: For the first 3 rounds, Taylor was well in control. In the 4th round, Williams was desperately tired to the point of spitting out his gumshield to try and catch a breather. Williams was knocked down in the 4th round from a body shot with just one minute left in the round.

It went the 4 round distance with referee Andy Brook scoring the bout 40-35 for a Taylor points victory. Taylor usually fights at Cruiserweight.

Fight Notes: Benka was making his pro debut under former world title challenger Henry Wharton. Benka came out in the 1st round fast but slowed down as soon as he realised that MJ Hall was not going to be taken out quickly.

The bout was stopped in the 3rd round via the advice of the doctor as there was a bad swelling on the right side of Hall’s forehead that was from a clash of heads. Time of the stoppage was 1:40 of round 3. Andy Brook was the referee.