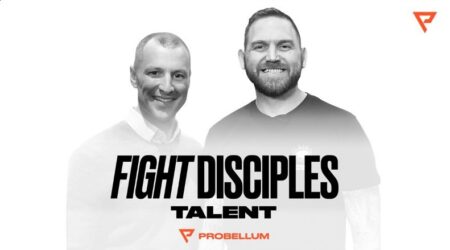 Fronted by highly-respected duo Adam Catterall and Nick Peet, ‘Fight Disciples’ have become one of the most influential outfits in all of boxing, dating back to winning the Best Sports Podcast at the British Podcast Awards in 2017 and 2018.

Between them, Catterall and Peet have worked for a number of major broadcasters, including BBC, BT Sport and DAZN, with the Fight Disciples brand continuing to grow and expand throughout the years.

Boxing fans across the world have taken an instant liking to the pair, who will now be an integral part of Probellum’s output moving forward.

They are the latest big names to partner up with Probellum and join their on-air talent line up, having already unveiled respected presenter Ali Drew, and expert pundit Paul Smith.

Probellum’s aim is to grow a digital platform which will serve millions of boxing fans worldwide on a 24/7 365 basis, and in its first year will promote, co-promote, or sponsor at least 100 events worldwide, and stage marquee events of its own in the United States, in the United Kingdom/Ireland, and in the MENA/CIS regions.

“Many people know that as well as boxing we also cover the UFC and we’ve been a huge fan of Eric Winter and his incredible work providing ground breaking access to content for fight fans over the years,” said Adam Catterall and Nick Peet, co-founders of Fight Disciples. The opportunity to work with him and his team to provide this access specifically to boxing fans was too good to miss.

“Add on to that the already established boxing expertise of Richard Schaefer and Harrison Whitman and Probellum have a formidable team that we want to be a part of.

“It was evident from early conversations they share the same vision for boxing as we do at the Fight Disciples, and we look forward to that vision playing out in the real world for fight fans to enjoy.”

“We’re extremely excited to have Fight Disciples join our on-air talent line-up here at Probellum,” said Richard Schaefer, President of Probellum. “Their growth over the past few years has been tremendous, and they’re only going to get bigger and better now that they’re part of our team.

“Both Adam and Nick have incredible knowledge of boxing and they compliment each other so well in their double act, so we can’t wait to give them a massive platform that allows them to shine in this new role.”