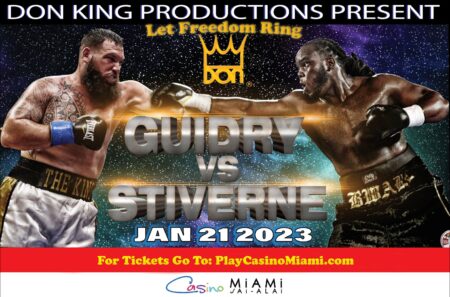 The world’s greatest boxing promoter, Don King, is returning to Casino Miami Jai Alai with another sensational championship card, “The Clash of the Champions!  Let Freedom Ring!”, on Saturday, January 21.

Tickets for the championship card are priced at $25, $50 and floor ringside are $100.  VIP tables will be sold at $2,500.   Tickets are available and can be purchased online at https://playcasinomiami.com.   The card will also be presented steaming live on www.donking.com and www.Itube247.com

Guidry is coming off a sensational performance against tough Dacarree Scott.  Guidry won a tough battle with Scott and sent him to the canvas at 2:01 of the seventh round to claim the NABA Gold Heavyweight title on June 11, 2022 at Casino Miami Jai-Alai.

Guidry had started the year suffering his first loss after 17 straight victories as a professional, losing a split decision and the WBA Championship to Trevor Bryan in Warren, Ohio on Jan. 29.

Stiverne, like Guidry, lost his last fight to Trevor Bryan for the WBA Heavyweight Championship on Jan. 29, 2021 at the Hard Rock Casino in Hollywood, Florida.   Bryan floored Stiverne twice, the last coming with 1:27 of the 11th round when referee Frank Gentile called a halt to the proceedings.

Seven other undercard bouts will be announced soon.