Aaron and Stevie McKenna continue their busy schedule this Friday 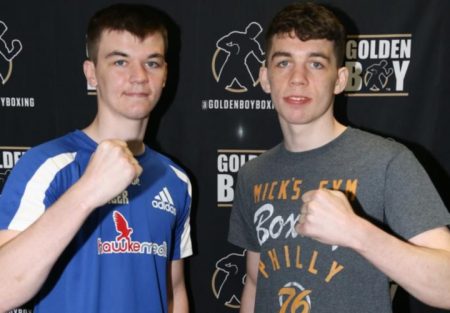 Momentum is key according to Ireland’s boxing brothers Aaron and Stevie McKenna as they look to maintain their unbeaten records in London tomorrow night.

Both Aaron and Stevie are set to feature on Hennessy Sports’ latest fight night, which is taking place on Friday 10th December at Crystal Palace National Sports Centre and being broadcast live on Channel Five.

Joining them on the bill will be cruiserweight Isaac Chamberlain, unbeaten heavyweight prospect Tommy Welch as well as a plethora of talent including Mick Hennessy Jr, Idris Virgo and Kaisee Benjamin.

This latest outing continues a busy period for the brothers in what will be their third contest in as many months.

Last time out, Aaron went the distance with Gabor Gorbics in Coventry, while Stevie knocked out his opponent Richmond Djarbeng in the Midlands.

Stevie, who has a record of 10-0, will be looking to extend his unbeaten run when he faces Jack Ewbank over 6 rounds.

Meanwhile, Aaron (13-0) also has the chance to win a belt in the capital, as he contests Carlos Gallego for the WBC World Youth middleweight title.

Looking ahead to their respective bouts, both Aaron and Stevie highlighted the importance of form and momentum.

“Momentum is very important to me, Hennessy Sports have been doing a fantastic job in keeping me busy and active,” said Aaron.

“It’s important to get as much experience as I can. People can expect to see fireworks from me in my next fight, I’m going to put on an explosive performance for everyone there and everyone watching on Channel Five.”

Stevie, echoed the thoughts of his brother on the importance of momentum and says he’s just looking to improve all the time.
“I’m one of the busiest fighters out there,” he added.

“I just want to keep making noise with every fight and keep growing and growing into a better fighter.

“My last fight only lasted 40 seconds, I was in against a guy with a great record and I think I made a statement with that win.

“I go out to entertain and go for the knockouts so don’t blink if you’re watching.” 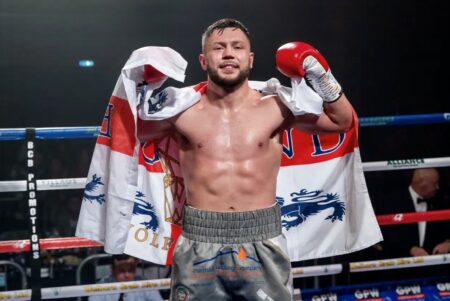 Conah Walker put Jack Ewbank to the sword inside a round in Wolverhampton last night.

‘The Wolf’ made light work of Ewbank in a change to BCB Promotions’ main event as they continue to go from strength to strength.

Walker was due to defend his Midlands Area Welterweight Title against Jamie Stewart only for the Stoke man to be informed of an issue with his brain scan on Wednesday.

The previously unbeaten Ewbank was drafted in at short notice as both he and Walker put their “0’s” on the line.

It was Walker who kept his as he moved to 10-0-1 with Ewbank moving out to 4-1 after a one sided affair. 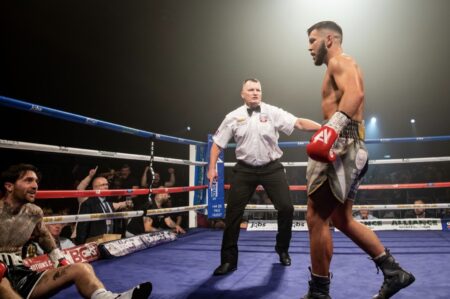 26 year-old Walker started like a train and put his Kent based opponent on his backside with almost his first punch.

Walker didn’t give his opponent time to settle and a flurry of spiteful shots soon saw Ewbank touch the canvass once again.

Looking visibly shocked, Ewbank looked to his corner as if to question what he was doing in the adrenaline fuelled Hangar Events Centre in the beating heart of Wolverhampton.

The 31 year-old was sent back out but didn’t last long under another barrage of shots which led to the towel being thrown in after two minutes and seven seconds of the opening stanza.

It was impressive and spiteful from Walker, trained by Richie Ghent, who appeared to revel in the white-hot atmosphere.

Elsewhere on the packed card four debutants were in action; all from Richie Carter’s Wolverhampton Boxing Club.

Bloxwich’s Lewis Morris boxed well against the always tricky Reiss ‘Showy’ Taylor. With an obvious height advantage, Morris actually found it difficult to land cleanly on Taylor but stayed disciplined throughout to earn a 40-36 win over four rounds.

Cannock’s Ollie Cooper also recorded a shut out win on his pro bow as he kept Kevin McCauley quiet in what was his opponent’s 241st outing.

Jermaine Osbourne-Edwards’ army of fans nearly brought the house down as ‘The Caveman’ made his long awaited pro debut. MJ Hall was in the opposite corner but Wolverhampton l’s Osbourne-Edwards stayed disciplined and again picked up a 40-36 win.

Wednesfield’s Alex Round was arguably the most impressive of the four debutants on show as he put Bloxwich’s Kearon Thomas to the sword to record a shut out win over four rounds.

Darlaston’s Ethan Collins, who only turned professional three weeks ago, was back in action and followed up that impressive display with another accomplished performance against the teak tough Des Newton. Collins threw the kitchen sink at Newton who, to his credit, took the lot but succumbed to a 40-36 loss.

Completing the card was Wolverhampton’s Kirstie Bavington who took on Stoke debutant Beccy Ferguson. In a slugging affair, Bav came out 60-55 victor.