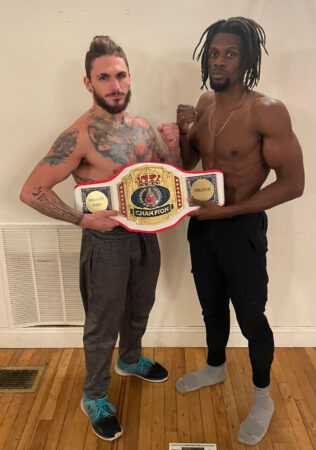 Tickets are priced at $60.00 (floor seats), $40.00 (standing room only), and $400.00 for ringside tables of 4 are available for purchase at https://granite-chin-promotions.ticketleap.com. Tickets will also be available to purchase fight night at the venue. 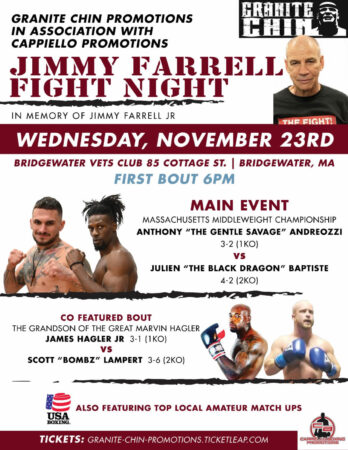 There are legitimate reports that the Thanksgiving Eve (Nov. 23) main event has bad blood brewing between the camps, largely because  Anthony “The Gentle Savage” Andreozzi resents how one of Julien “Black Dragon” Baptiste‘s coaches harassed him after he was forced to pull out of their originally schedule fight last August due to illness.

The two fighters were originally slated to fight for the vacant Massachusetts Middleweight Championship, but Andreozzi was too ill to fight, but their match will now headline “Jimmy Farrell Fight Night”, presented by Granite Chin Promotions, at Bridgewater Veterans Club in Bridgewater, Massachusetts.

Granite Chin’s Pro-Am card will honor the late Farrell, the highly respected trainer from Quincy (MA), who recently passed away after a long battle with cancer. A share of the proceeds will be donated to Old Colony Hospice.

Andreozzi (3-2, 1 KO) has been training for this fight since May. He’s so serious that he quit his job in order to have additional time to train. “Moving the fight date didn’t disrupt my training,” Andreozzi explained. “My medical issue disrupted our fight. I was throwing up before I got there (venue). I have a delicate stomach and that resulted in an infection in my lower stomach, causing a volatile scenario. . I have a form of colitis and have dealt with it my whole life. I took more medication but kept throwing up. I took 4 different medications. The combination of cutting weights – only 3-4 pounds of water the day of the fight – and taking antibiotics gave me stomach poisoning. The doctor said it was a ‘perfect storm.’ I learned my lesson and that won’t happen again.

“I was thrown a curveball, but I’m used to that. His coach said some horrible stuff to me while I was still puking-up blood in the parking lot. There’s bad energy here. That gave me motivation to train 2 or 3 times a day. I started boxing two years ago on the B side. No amateur background and now I’m fighting for the state title. I want to let him (Baptiste’s coach) know that I’m not scared and shouldn’t have been talked about like that.”

Baptiste (4-2, 2 KOs), of Woburn (MA), has been training 8 weeks for this fight and he’s eager to go. He never questioned Andreozzi for pulling out of their originally scheduled fight.

“I’m ready to go,” Baptiste remarked. “I’ve trained longer and gotten stronger to prove I’m better than him. We were set to fight, but right before it, he wasn’t well. He was throwing up. I’ve never had anything like that happen in the pros. It did happen before in the amateurs. That was my first experience as a pro. I took it as a learning experience. I hope he’s well and there’s no animosity (on his end). I’m sure he’s trained hard for this fight like I have. I need to go into the ring and prove I’m better than him.”

“I am excited that this fight is finally happening in November,” Granite Chin Promotions president Chris Traietti noted. “What happened to Anthony was unfortunate. When I saw him outside the venue, I knew there was no way he was fighting. He was trying to wait it out to see if his stomach pain passed, but I told him he would have to report to the ringside doctor and get cleared before I would consider letting the fight happen. I remember breaking the news to Julien and I had an awful pit in my stomach. I sincerely just felt horrible for both guys for different reasons. But that is in the past, Thanksgiving Eve the fans in Bridgewater are in for a great night of boxing. The main event won’t be short of action and there is going to be a new Massachusetts Middleweight Champion crowned.”

Fighting on the pro undercard in 4-round bouts is Brockton heavyweight Kirk Wilmont (1-0, 1 KOs) vs. Aquilla Prote (0-1), and Brockton pro-debuting junior welterweight Stephen Davis meets an opponent to be determined.

Additional pro matches, as well as the amateur portion of the card, will soon be announced.