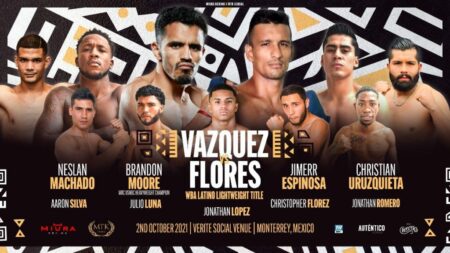 Vazquez-Flores and a full slate of undercard bouts will stream live and exclusively on ESPN+ starting at 8 p.m. ET/5 p.m. PT.

Vazquez (43-10, 17 KOs) held the IBF lightweight world title for more than four years, from August 2010 to September 2014, and made six successful title defenses. He is 9-6 in his last 15 bouts, a run of fighting top competition that’s included a ninth-round stoppage defeat to current undisputed junior welterweight world champion Josh Taylor and last October’s highly controversial split decision loss to Lewis Ritson. He rebounded from the Ritson disappointment with April’s seventh-round TKO over Isai Hernandez. Flores (30-3-2, 19 KOs), from Leon, Nicaragua, challenged Takashi Uchiyama in 2015 for the WBA super featherweight world title, falling via third-round TKO. He is 3-1 since that setback and has not fought since a second-round TKO win over Rolando Giono in September 2019.

Rising Cuban contender Neslan “Pitbull” Machado (17-0, 8 KOs) will face the upset-minded Alan “Malagueno” Salazar (11-8-1, 3 KOs) in an eight-rounder at a contract weight of 124 pounds. The 25-year-old Machado previously won the WBA International and WBC Latino belts at 122 pounds. Salazar has lost only once by stoppage.

Featherweight Jonathan “Geo Don” Lopez (4-0, 2 KOs), an 18-year-old phenom from Puerto Rico, will step up in an eight-rounder against Jorge Amaya Diaz (6-1, 3 KOs), who has never been knocked out as a pro.