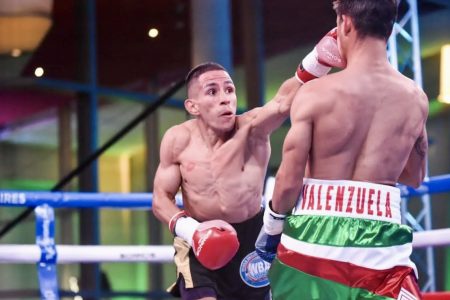 Leandro José Blanc (5-0 & 3 KO’s) beat German Valenzuela (17-3 & 12 KO’s) in a 10‑round fight, 96-93, 98-93, 96-93, and Blanc retained his FEDELATIN WBA Light Flyweight title on EstrellaTV’s Boxeo EstrellaTV. The series occurs on the last Friday of every month, and last night, the fights were broadcast from Casino Buenos Aires, Argentina.

In the first rounds of the main event, Valenzuela visibly dominated Blanc, but the Argentine fighter Blanc turned the result around to make the fight the most balanced on the card.

Both fighters kept the fight even, despite their efforts to stand out with their punches. Blanc took the split decision in a fight in which their conflicting styles complicated the fight. Valenzuela could not decipher Blanc’s attack, and the Argentine knew how to take advantage of the Mexican boxer’s bewilderment.

Blanc began to impose himself on Valenzuela in the middle rounds of the fight as the Mexican could not continue his early dominance. Due to a stumble, Blanc managed to send Valenzuela to the canvas in the sixth round, a fall that cost the Mexican boxer two points, but neither fighter could find the blow to finish off their rival.

In the co-main event, Fabián Orozco defeated Jorge Ascanio by technical knockout in a 6-round super bantamweight fight.

Ascanio showed excellent boxing skills with a very good left hand. Unfortunately, he suffered an injury while connecting with a blow to the head of Orozco and was unable to continue. Ascanio abandoned the fight at the beginning of the fourth round due to a serious injury to his right hand, leaving the victory to Orozco, whose record had more than 10 fights without a win.

During the 3 rounds, Orozco had several unsuccessful attempts to hit Ascanio, who knew which blows to use to be most effective against his opponent.

Ascanio dominated the 3 rounds, and the judges’ scorecards were in his favor, but in the end, Ascanio took his first defeat as a professional boxer.

During the 10 rounds, Ramírez put pressure on Lescurat, who also managed counterattacks and handled the fight quite solidly. Ramírez looked for the fight all the time, always on the inside against Lescurat, who, according to the judges, took the victory tonight at the Casino Buenos Aires. 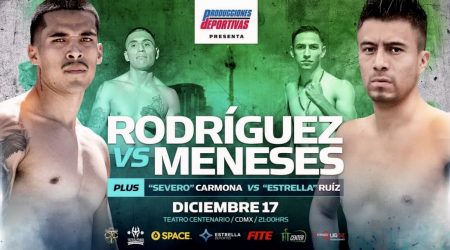