A landmark Saturday looms for six-members of the Split-T Management stable as the fighters, and will be featured in world title and, and high profile bouts on major platforms.

Bridges of New South Wales, Australia, has a record of 7-1 with three knockouts. The 35 year-old Bridges has won two straight since her heroic effort against then WBA champion Shannon Courtenay on April 10, 2021. Bridges is coming off a points win over Mailys Gangloff on September 4, 2021 in Leeds.

Roman of San Juan Argentina is 16-5-1. The 39 year-old is a longtime and distinguished champion as she has defended her eight times. An eleven year professional, Roman defeated Carolina Duer (19-3-1) to win the IBF title on August 4, 2017 in Buenos Aires, Argentina. Some of her bigger defenses came over Duer in a rematch, Julieta Cardozzo (12-3) and her last bout when she defeated Daniela Rivero on November 26th in San Juan, Argentina 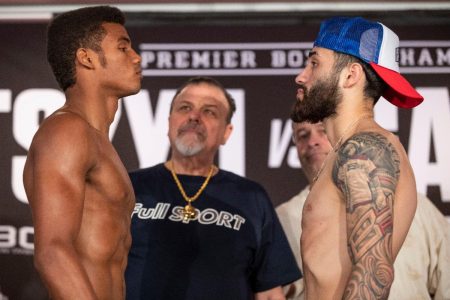 In Minneapolis, lightweight Joseph Adorno faces off with Michel Rivera in the co-feature of a SHOWTIME® Championship Boxing card ( 9 PM ET)

Adorno of Allentown, Pennsylvania is undefeated at 14-0-2 with 12 knockouts, is 22 years-old, has a win over previously undefeated Kevin Cruz (8-0) and is coming off a draw with Jamaine Ortiz on April 24, 2021 in Kissimmee, Florida.

Rivera of Miami, Florida via the Dominican Republic is 22-0 with 14 knockouts.

Adorno is promoted by GH3 Promotions. 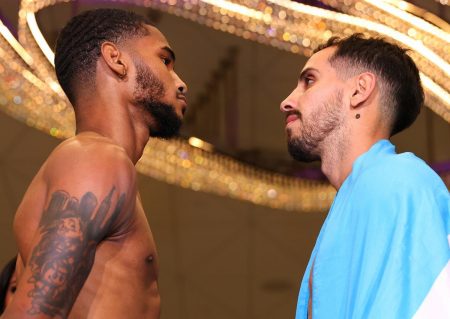 In Las Vegas, three of Split-T Management’s undefeated prospects will see action as part of an ESPN+ stream.

2021 United States Olympian Tiger Johnson looks for win number-three without a loss when he takes on Sebastian Gabriel Chaves in a six-round welterweight contest.

In his last bout, Johnson won a four-round unanimous decision over Xavier Madrid on January 29th in Tulsa, Oklahoma.

Chaves of Buenos Aires, Argentina is 5-3 with two knockouts. The 27 year-old sports first-round stoppage over Dorian Maidana (5-0). Chaves is coming off a loss to undefeated Alex Vargas on November 11, 2021 in Huntington, New York. 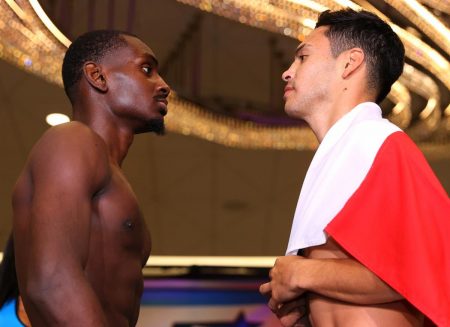 Brady of Albany, Georgia is 5-0 with three knockouts. The 20 year-old Brady has been a professional for two years.

Brady has a win over Roberto Negrete (3-0) and in his last bout, Brady won a six-round unanimous decision over Diuhl Olguin on January 29th in Tulsa, Oklahoma.

Angel of Carolina is 8-2 with two knockouts. The 27 year-old Angel is coming off a loss to undefeated Jaywon Garrett on June 19, 2021 in Miami. 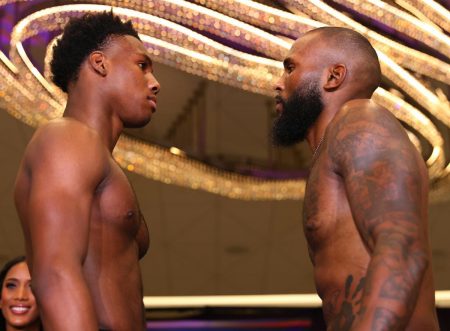 Light Heavyweight Dante Benjamin is primed to make his 2nd start when he takes on Kevin Johnson in a battle of undefeated fighters.

Benjamin, 19 years-old of Cleveland, Ohio amassed over 100 wins as an amateur, and was a seven-time national champion as he was a 2016 and 2017 Junior National Champion, 2017 Eastern Regional Champion, and a 2018 Youth National champion. He also took first place in the Emil Jechev International tournament in Botevgrad, Bulgaria.

In 2017, he was named the Under Armour Fighter of the Year.

Benjamin won his pro debut via opening round stoppage over Herman Rendon on January 29th in Tulsa, Oklahoma.

Spencer of Montreal, has a record of 3-0 with two knockouts. This will be Spencer’s fourth fight in seven months and she is coming off a unanimous decision over Milagros Diaz Perez on January 29th in Tijuana, Mexico.

Aguilar of Mexico is 7-6-1 with one knockout. Aguilar has wins over two undefeated opponents in Karla Ramos Zamora (2-0) and Estefina Zapiain (1-0). Aguilar is coming off a loss to former world champion Delfine Persoon on November 1, 2021 in Belgium