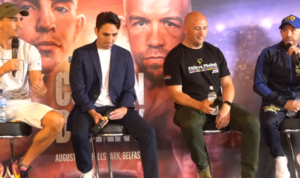 Tempers flared between Michael Conlan and T.J Doheny as they had a heated back and forth during their final press conference.

The event takes place at Falls Park in Belfast on Friday as part of the Feile an Phobail festival, and will be broadcast live on ESPN+ in the USA, and on Fite TV for the rest of the world.

The press conference took place on Tuesday, and things got tense between Conlan and Doheny as they sat down in front of the media.

T.J Doheny said: “The fight was agreed upon before I even started by camp to be 10 rounds at super-bantamweight. He’s running down from 126lbs to 122lbs and can’t even make the weight.

I’m coming here as the away fighter and everyone keeps mentioning that, but the best performances of my career seem to be when I am the away fighter. You see that with the shifts I’ve put in.

“I got the world title in Japan, and then fought Roman and a lot of people thought I won that fight. Roman won’t be fazed by the crowd on Friday, and I’m excited to fight in front of the Belfast crowd.

“They’re the most passionate fans in the world, and I’d love to have a city like that behind me. I’m a bit of a road warrior and I keep upsetting the odds.”

Michael Conlan said: “Stop bottling it. Are you going to walk away? No, so the fight is happening. I’ll box the ears off you on Friday night.

“I’m the better fighter and I’ll be victorious. No matter what he tries to bring, I’ll be the one getting my hand raised on Friday night.

I can’t wait to be back in Belfast. I don’t think there was a better atmosphere in Ireland all year round than when we fought here in 2019, and it’s going to be special again this week.”

Promoter Jamie Conlan added: “The fans can expect potentially the best all-Irish fight in history. TJ Doheny should have been unified world champion in 2019, he pushed Daniel Roman to the limit and I thought he should have been the winner.

“Mick has proven himself all over the world as an amateur and now the chance to prove himself as a professional. They will both see each other as the perfect opponent, and it makes all the ingredients for a fantastic fight.

Lee McGregor said: “I had 6 months preparation for Guerfi, and then I finally got my hands on that belt in March and I’m looking forward to defending it on Friday night.

“The setbacks ended up being a blessing, it gave me so much time to improve in the gym and work with Ben for even longer. I can confidently say I wouldn’t have did to Guerfi in November what I did to him in March.

“I made a big statement and I’m ready to make another on Friday. I’m improving at a fast pace, and I’m excited to see what other opportunities arise after Friday.

“Legrand will be tough, and you don’t get to 32-0 without knowing what you’re doing. He’s been down at flyweight, and I’m a big bantamweight, so I’m confident of getting the job done in style.”

Tyrone McKenna said: “I’ve said numerous times we’ll see war. He says he’s looking for blood and looking to test me. I can guarantee he will find out on Friday night. We have 8000 fans who haven’t been to a boxing event for nearly two years, I want to entertain them.

“Jamie came to me with a few people to pick from, and I picked the hardest one for the fans. There were people who were 13-3 and I saw his record and thought that’s what the fans want the most, so I picked him.

“I don’t want easy fights, and I don’t want to bore the public. If it goes 10 rounds it will be a bloodbath. I guarantee a war.”

Jose Felix Jr. said: “This is my first time in Belfast. I am ready for a fight and I think my opponent is a great fighter. They call him Mexican, but that’s not the same as being in there with a real Mexican. I hope he stands and we can put on a great show for all the fans.”

Padraig McCrory said: “I wish the fight with Ellison would have gone longer. Only lasted 70 seconds. Was due to fight in March on Lee McGregor’s card, picked up a freak injury. Always been training and keeping active, not worried about not fighting. More than ready for this fight. He’s used to travelling, but he hasn’t fought in front of 8000 Irish fans.

Sergey Gorokhov said: “This is my first time in Belfast. This city is very nice and I am ready to fight. The people here are very good and the atmosphere is brilliant. Thank you very much for a fantastic welcome.”

Promoter Jamie Conlan added: “The headline act is one of the best fights ever on the island of Ireland but it’s also one of the best cards ever assembled on Ireland. McKenna vs. Felix is a fantastic fight. It was thrown together pretty quickly as Tyrone will fight anybody.

“Felix sees it as a fantastic opportunity to come to Ireland and upset the applecart. It will be a firefight. Every fight Tyrone is in is fantastic, and any fight involving a Mexican is usually fantastic. Mexicans have been coming over and upsetting the odds. Fans will be in for a treat.

“Lee McGregor is probably the best prospect in the UK, but you probably can’t even call him that anymore as he has three belts. His drive and determination and ambition to succeed quickly in his career is paying off.

“Guerfi I thought would be a tough night for Lee, but he blew him away in one round. He’s improving every fight under Ben Davision and has a proper set up around him now that he didn’t have that at the start of his career. LeGrand is a 32-0 challenger so I’m expecting fireworks.

“McCrory is a big Belfast favourite, and it’s a fantastic opportunity for him to fight for a title against Gorokhov. It will be a very tough fight, and I believe this could be the fight of the night.

“Padraig has re-invented and rejuvenated his career, and is getting himself a new lease of life. He’s dedicating himself to the professional game, and it’s starting to pay off.”