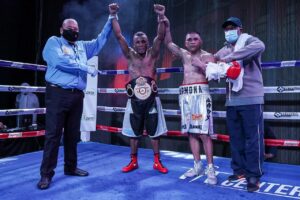 Sanmartin was in the main event of the evening organized by Producciones Deportivas and was able to get a great victory for his career. Sanmartin won the unanimous decision on the judges’ scorecards of 98-90, 97-92 and 98-92.

In addition to his good boxing and the order he kept in the ring, the “General” knew how to assert his power and knocked down the Mexican twice to leave no doubt about his victory.

The Barranquilla native will now look for better opportunities after this international victory, which will help him climb up the rankings.

Sanmartin’s record improved to 32 wins, 5 losses, 1 draw and 20 knockouts, while Carmona dropped his record to 22 wins, 9 losses, 5 draws and 9 knockouts.