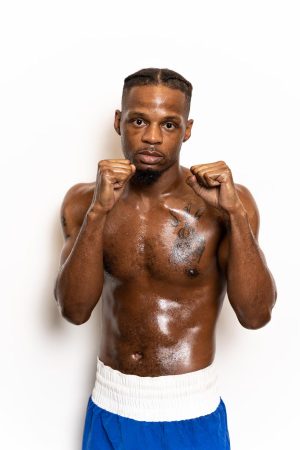 After getting off to a relatively late start at age 19, the naturally gifted Hicks quickly fought his way to being named Captain of Team USA’s international amateur-boxing squad. He was also a National Golden Gloves Champion in 2019; a three-time Eastern Elite Qualifiers Champion (2017, 2018, 2019); and a five-time Michigan Golden Gloves Champion (2013, 2015, 2017, 2018 and 2019) in his distinguished 100-bout amateur career.

Despite his considerable resume, Hicks reveals he’s decided to venture over to the professional side of the sport after feeling cheated of his dream of fighting for the USA Olympic Boxing Team by the pandemic.

Signing with Salita, he says, started with a tough sparring session in Detroit with one of the promoter’s other fighters.

“We were sparring with Marlon Harrington,” explained Hicks. “Marlon is a really good fighter. After I finished sparring him, I got a call from Marlon’s coach that his promoter, Dmitriy Salita, wanted to talk to me. Once I sat down with him, I liked everything he said. I can tell a good person when I meet him. He’s genuine and honest. I called my manager David McWater and told him I wanted to go with Salita. So, here we are, ready to get started.”

Family is vitally important to the 28-year-old Hicks, who cites his late father, Joseph “Sug” Hicks Sr., as the reason he started boxing. “My father loved it,” he recalled, “being at the gym made me feel close to him when he passed. He was a big fan. I remember when I was younger, he would put gloves me and tell people I was going to be his champ someday. The reason I chose the nickname ‘Sug’ is it was my father’s nickname. When I get in the ring, once the bell rings, I feel like he takes over.”

Hicks also has a five-year old daughter, Ariel, with his wife, Zoe Hicks (who is also an elite amateur boxer and is currently ranked #5 in the USA at 119 lbs).

Clever, quick-fisted boxer, well-known for his light-speed reflexes, Hicks says he loves to use his boxing skills in the ring, but the power in his right hand means he can also sit down on his punches when necessary.

So advanced are his considerable skills and so confident is his team that, according to Hicks, they have all agreed he will make his professional debut under the Salita banner early next year, starting with six-round bouts, instead of the customary four rounds.

“I want to get in as many fights as possible as quickly as possible, starting out with six rounders,” he explained. “We will debut in a six-rounder and then go right to eight after three or four fights. I’ve already fought overseas tournaments with no headgear. It’s no big deal. I always thought I had a pro style. I don’t think it’ll be a big adjustment. Especially with six rounds to work with, to set up some things up.”

Promoter Salita says he’s excited to be adding yet another outstanding Michigan-based talent to his formidable stable of top-level fighters.

“Joseph Hicks Jr., is an important part of the state’s next generation of boxing stars,” said Salita. “I’m happy to be adding him to the Salita Promotions team and looking forward to working with him and his manager, David McWater, with whom I’ve always had a great working relationship.”

Fighting out of Grand Rapids post-Floyd Mayweather can mean instant comparisons to the retired 50-0 superstar, but Hicks says he gets a great deal of support from another fighting alumnus of the city.

“There are two Grand Rapids boxers I look up to. One is Peter Quillen and the other being Floyd Mayweather, of course. Peter Quillen and I speak often. He tells me to continue to do me and make sure I stick with a good team that loves me and believes in me. He tells me life-motivational things. He tells me he’s very excited to see what I do in the pros. He’s one of the guys who know where I came from and where I am. He actually saw me get everything on my own the hard way with no handouts and he tells me he admires that.”