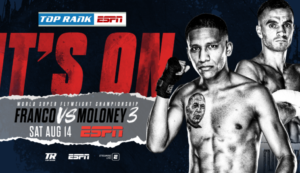 Josh Franco has vowed to finally settle the score with Andrew Moloney when they have their trilogy fight for the WBA super-flyweight title next month.

The fight comes following their no decision back in November after an accidental headbutt, but Franco is ready to earn a definitive victory this time around.

Franco said: “I’m very excited for this third fight with Moloney. I’ve been preparing very well for this fight, and I’m feeling stronger than ever.

“I hope everybody tunes in come fight night because it’s going to be one to remember. I will remind Moloney why I’m the champ. And still!”

Moloney said: “I’ve had to wait nine months to once again fight for what should have been mine back in November. There is no way I’ll be leaving that ring without my world title this time.

“I’ve stayed in the gym and used this time to improve as a fighter. He is up against an even better fighter than he was the last time around. He’s in trouble.”

Top Rank chairman Bob Arum added: “The Hard Rock and the fight fans of Tulsa are in for a treat with a grudge match between Franco and Moloney, and an all-action fight between Barboza and Moran.”