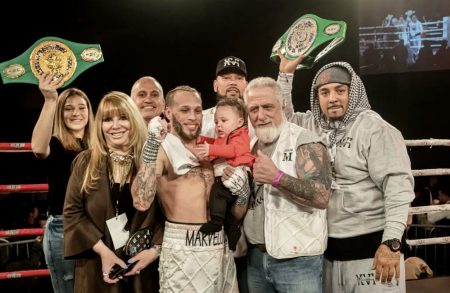 The homecoming king put on a royal performance Saturday at the Connecticut Convention Center.

The event, promoted by CES Boxing, featured four pro bouts with Williams closing the show in style with his first knockout victory since 2018. Luckey fought hard, but Williams dominated the bout and controlled the pace throughout, saving his best performance for the fifth round, where a visibly fatigued Luckey had trouble warding off the body shots. Luckey’s corner threw in the towel between rounds, resulting in a victory at the 3-minute mark of the fifth round.

The action was intense through all six rounds as both fighters stood toe-to-toe unafraid to exchange. Orta did his best work to the body, but also opened a cut under Santiago’s left eye at the end of the fourth that, while not high enough above the eye to deter Santiago, was enough of a distraction to allow Orta to close out the final two rounds.

Renaud boxed circles around Dixon for the first three rounds, working his left jab to set up the straight right while Dixon spent most of his time covering up and looking for an opportunity to counter.

Midway through the fight, Renaud began working the body more consistently and withstood whatever late flurries Dixon had in the gas tank. The end result was a clean sweep that wasn’t as close as it appeared on the cards.

Gonzalez controlled the pace of the fight and was the aggressor throughout, but Terry kept pressing forward, forcing Gonzalez to use his speed and footwork to stay out of harm’s way. Gonzalez did his best work during the intense, up-close exchanges, working the body effectively and mixing in short uppercuts to momentarily stop Terry’s progress. Gonzalez is now 9-0 and now 2-0 in his hometown, where he also won in September.