Seven home fighters were victorious on Friday evening as BCB Promotions returned to the salubrious Eastside Rooms in Birmingham.

West Bromwich light heavyweight, Josh Stokes, topped the bill as he moved to 7-0 with a 40-37 victory over ever-game Harry Matthews. Stokes will be eying an Area Title by the end of 2022.

Kingswinford’s Danny Ball made a welcome ring return. The welterweight suffered a broken jaw in his last outing – a British, Commonwealth and IBF European Title encounter with Ekow Essuman – back in October. Ball bounced back with a routine 40-36 win over Dale Arrowsmith.

Jake Melvin, son of trainer Malcolm, made his pro debut and brought with him an army of supporters . Bulgarian Petar Aleksandrov was the opponent and he made Jake work hard for his 40-37 win.

Fellow Brummie, Brandon Jones, moved to 4-0 in the light heavyweight division after opponent Elvis Dube was forced to retire at the end of the opening round with a shoulder injury.

Another fight that didn’t go the distance was Connor Goodchild’s. The Birmingham welterweight looked far more composed in his second outing as he went through the gears to stop Sultan Ahmet in the third round.

Hereford lightweight debutant Danny Williams defeated Lee Hallett in a real ‘welcome to the pro game’ fight, which was scored 39-37 in Williams’ favour.

Fellow Hereford fight, Cliff Henry, moved to 2-0 at the ripe old age of 41 with a 40-36 win over popular road warrior, Lewis Van Poetsch.

6-0 Josh Stokes out next in Birmingham on April 29

Josh Stokes reckons that getting the rounds in will help him to prepare for the long haul.

He is part of the line-up for when BCB Promotions return to the Eastside Rooms, on Woodcock Street in Birmingham, with fight night set for Friday April 29.

Stokes has moved to 6-0, as a pro, and expects a seventh paid contest to be his last four-rounder, before he steps up to six rounds and then the title distances.

The unbeaten light heavyweight, from West Bromwich, has landed two stoppages among six wins, but went the distance for a fourth time in his last outing, on February 13.

He outpointed Stanko Jermelic by a points whitewash, referee Chris Dean scoring proceedings 40-36, on another BCB offering in Birmingham, at the H Suite in Edgbaston.

The 28-year-old from a four-year absence in December, flooring Jonathan Castano before forcing his retirement, at the end of just two rounds.

That made it back-to-back TKOs for Stokes, although the previous one was way back in September 2017, halting Raimonds Sneidze in round two, completing his debut year.

Three 40-36 points landslides preceded that in 2017 and make up the rest of his pro record, defeating Mitch Mitchell, Curtis Gargano and Richard Harrison.

Stokes clocked up over 50 bouts as an amateur, too, for Wodensborough Boxing Club and was a national champion in the 2011 Junior ABA Championships.

That has led to top-class sparring for this fight camp, sharing a training ring with Olympic silver medallist and Wodensborough alumni Benjamin Whittaker.

Stokes said: “I’ve known Ben since he was a kid, we both came through at Wodensborough and he’s gone on to become a top-class boxer, so the spars have been great stuff for me.

“He’s younger than me (Whittaker is 24), but I can still learn bits and bobs from him, because he’s competed at the highest level. The sparring has helped me out.

“I’m looking for this to be my last four-rounder, then I can go up to six and perhaps even 10 rounds from there. I think I’ll be ready for a title shot, by the end of this year.

“I was happy enough with my last performance. It was good to get the rounds in and practice a few things I’d been working on, such as my movement and defence.

“The opponent was a bit negative and was on the back-foot, so I had to go looking for him, but I felt relaxed and, obviously, it was a comfortable win for me.

“I’ve had the stoppages, but I don’t go in there looking for them. I try and box to the best of my ability. I take the attitude that if it comes, it comes.

“Things are starting to come together for me and it’s like I’ve never been away now. I just want to keep developing, until I’ve got the experience that I need.”

Tickets for the Eastside Rooms bill are available, priced at £40 standard or £75 VIP ringside with buffet, directly from the boxers or by visiting myfighttickets.com 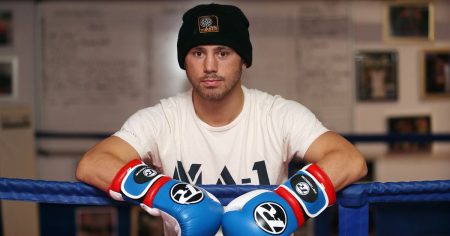 The Birmingham Middleweight returned from a two year boxing sabbatical in October and once again got valuable ring time under his belt.

The John Costello trained fighter is targeting titles in 2022 and looked sharp and ready against a tough opponent in Markov.

Kelly picked his shots well and caught Markov with a beautiful body shot at the end of the fourth, doubling the Bulgarian up as he took an 8 count before being saved by the bell.

Kelly continued to pour forward in the fifth and dropped Markov twice with stinging shots before referee-for-the-evening Kevin Parker waved off the contest.

Birmingham’s Brandon Jones opened the show with a 40-36 victory over Wolverhampton’s Antony Woolery.

Light heavyweight Jones, one of three John Costello fighters on the bill, will have learned a lot from the four rounder against the tough and experienced Woolery. Brandon moved to 2-0 with his win.

Troy took on Plymouth’s Christian Hoskin-Gomez in what was a very entertaining bout.

With his obvious height and reach advantage, the Brummie super middleweight looked to keep it long but Hoskin-Gomez closed the gap and the pair went toe-to-toe for the majority of the four rounds.

‘Jazzy’ was due to face Quaise Khademi for a third time after beating and drawing with the Londoner. The British Title was set to be on the line once again but an injury to Khademi has led to the fight being postponed until 2022.

BCB trained Ahmed took the chance to get some rounds under his belt. Catching Torres at will, Ahmed dropped the Spaniard in the fourth and put him away with a flurry of spiteful shots that led to Parker rightly waving this one off 36 seconds into the fifth round.

Wednesbury light heavyweight, Josh Stokes, made a welcome return to the ring after a four year absence.

Trained by Richie Ghent, Stokes blew away the ring rust against Spaniard Jonathan Castano who retired on his stool at the end of the second round.

Stokes caught his opponent with a huge right hook in that second round which Castano never fully recovered from.

BCB are back in action next Wednesday in Northampton and next Sunday in Wolverhampton. For more details, visit bcb-promotions.com.