Joe Joyce: “I’ll Have the Power to Stop Him” 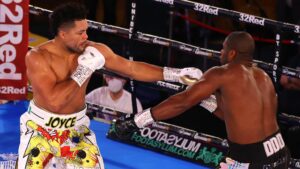 “Yes, it’s going as planned so it seems… the winner will get the WBO. It’s looking like April. The negotiations seem to be going well and it looks like the fight is going nicely and it’s almost confirmed. I can’t wait. Back in the gym, getting ready. I think I’m going to go for the knockout, the stoppage. I’m going to stop his feet.

“I’m going to have to be smart and switched on not to take too many shots back. I want to stop his feet by any means necessary but also listen to my corner and all the things I’ve been doing inside the gym. Do all the hard work in the gym so it’s easy by the time I get to the fight.

“I’ve learned a lot since then and he’s bulked up in size a bit. Maybe he lost a little speed, so I’ve kind of caught up with him, and I hope to take over him in this next fight.

“I got a lot of experience in the WSB. Yeah, I hadn’t really fought a southpaw as good as him. It was a really tough fight. It was a good learning fight for me as well because his skills were next level. This whole camp will be focused on fighting him, so I’ll be getting the sparring and the tactics. I’ll be working on stuff just for him. Also, the pro gloves and the power shots that I’ve picked up over the years. I’ll have the power to stop him. I just need to catch up to him, cut off the ring on him, and don’t let him move around too much and take it away from him. He’s going to be a tough person to catch to land a shot, but very skilful. Hit him on the nose, the body, the head.”