Jared “The Real Big Baby” Anderson improved to 12-0 with 12 knockouts, knocking out Serbian veteran Miljan Rovcanin (24-3, 16 KOs) with a chopping right hand at the end of the second round. Anderson, from Toledo, Ohio, returned to the ring for the first time in nearly nine months and made up for lost time. He hurt Rovcanin to the body and then focused on the head. Anderson now has nine knockouts in two rounds or less.

“I was very calm. I was very patient. Actually {trainer Darrie Riley} was more nervous than I was as usual, though. I felt very relaxed, pretty much the most relaxed I’ve ever been,” Anderson said. “I heard my coach tell me to switch {to southpaw}. I listened to him as always, so that was really the reason I switched.”

U.S. Olympic silver medalist Richard Torrez Jr. (3-0, 3 KOs) obliterated Marco Antonio Canedo (4-3, 2 KOs) in just 44 seconds, the second first-round knockout for Torrez in as many months. Torrez, a southpaw from Tulare, California, knocked down Canedo with a straight left hand 20 seconds into the round. He followed up with a crisp combination that culminated with a right hook that collapsed Canedo face first.

Torrez turned pro in March following last summer’s Olympic run in Tokyo and has thus far been as advertised in the paid ranks.

“I am happy with the result, but my thoughts right now are with Canedo,” Torrez said. “He’s a tough man, and I have the utmost respect for him. It happens to the best of us.”

Tiger Johnson (5-0, 4 KOs) TKO 5 Harry Gigliotti (8-4, 3 KOs), 2:17. Gigliotti had never been stopped as a pro until he ran into Johnson. For nearly five rounds, Johnson battered and bloodied the Massachusetts native until referee Mark Nelson waved off the fight following a series of left hooks. Johnson landed 55 percent of his power blows and outlanded Gigliotti, 136-21.

Efe Ajagba (16-1, 13 KOs) TKO 2 Jozsef Darmos (14-5-3, 10 KOs), 1:15. The comeback is on for Ajagba, who stopped the overmatched Darmos with a pair of knockdowns in the second round. Referee Gary Ritter stopped the fight immediately following the second knockdown, which was courtesy of a right hand to the side of the head. Ajagba had not fought since last October’s decision loss to Frank Sanchez. Following the Sanchez fight, Ajagba had surgery on both elbows and returned to vintage form with a clean bill of health.

The fight turned when a clash of heads opened up a cut over Commey’s left eye in the sixth round. Pedraza, fighting out of a southpaw stance, started backing up the noted power puncher and ripping shots at close range. The punch stats were razor thin, as Pedraza outlanded Commey, 165-149.

“Even though my eye was inflamed, we understood that it was done because he has a good right hand. The entire night, the whole point was to neutralize that right hand. Despite the fact that it was inflamed, I was able to do that,” Pedraza said. “I’ve never turned down a fight, and I’m not going to start now. Whatever Top Rank wants for me. If they demand a rematch, I’m ready to give Richard Commey a rematch because he deserves it and I have the utmost respect for him. Ultimately, my goal is to win a world title once again. Whatever I have to do, that’s what I’m willing to do.”

Commey said, “It is a draw. Obviously, I have to go back home and see my people. I love my people, and I gotta go back there, do what I gotta do.”

Jeremiah Milton (6-0, 5 KOs) KO 2 Nick Jones (9-5, 6 KOs), 2:49. Tulsa native Milton brought the thunder to the hometown crowd, icing Jones with a right uppercut to the temple late in the second round.

Frevian Gonzalez (6-1, 1 KO) UD 6 Gerardo Esquivel (3-3-1, 1 KO), Scores: 58-55 and 59-54 2x. Gonzalez, a stablemate of Pedraza, picked up his second consecutive win with a convincing six-round verdict over the rugged Esquivel. Gonzalez was in control for five rounds until things nearly came apart in the sixth. After getting stunned early in the round— and then having a point deducted for holding — Gonzalez returned fire with a series of looping right hands that forced Esquivel to retreat.

Abdullah Mason (4-0, 3 KOs) UD 4 Angel Rebollar (5-1, 3 KOs), Scores: 39-36 and 40-35 2x. Mason knocked Rebollar down with a right hook less than 20 seconds into the opening round, but Rebollar did not relent. The 18-year-old prospects went toe-to-toe, as Cleveland’s Mason went the distance for the first time in his career. Rebollar did find a home for his right against the southpaw phenom.

Light Heavyweight: Dante Benjamin Jr. (4-0, 2 KOs) UD 4 Leandro Silva (3-7, 2 KOs), Scores: 40-36 3x. Benjamin had his hands full against Silva, a rough-and-tumble fighter who is also a veteran of nearly 40 MMA bouts. Silva held and grappled on the inside, making Benjamin uncomfortable at times. Benjamin found his groove late in the fourth round, posing with his hands behind his back and ripping combinations to Silva’s head. 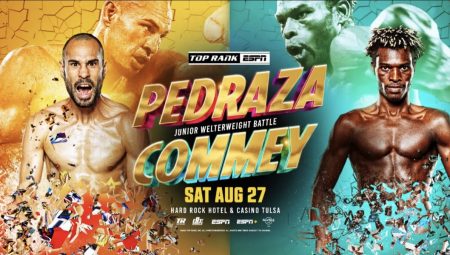 In the 10-round heavyweight co-feature, the fighting pride of Toledo, Ohio, undefeated puncher Jared “The Real Big Baby” Anderson, returns to action against veteran Miljan Rovcanin.

Promoted by Top Rank, in association with DiBella Entertainment, Pedraza-Commey and Anderson-Rovcanin will be broadcast live on ESPN, ESPN Deportes and ESPN+ at 10:30 p.m. ET/7:30 p.m. PT.

Tickets starting at $49 are on sale now at www.hardrockcasinotulsa.com.

“The junior welterweight division is talent-rich, and the winner of Pedraza-Commey is in line for a massive fight,” said Top Rank chairman Bob Arum. “We are thrilled to see Jared Anderson back in action. He is the world’s best young heavyweight, and fans will have another opportunity to see a future superstar.”

Pedraza (29-4, 14 KOs), from Cidra, Puerto Rico, is a two-weight world champion who has fought many of this generation’s top fighters since capturing the IBF junior lightweight crown in June 2015. He moved up to the junior welterweight ranks in 2019, rebounding from a loss to Jose Zepeda to author victories over Mikkel LesPierre, 2008 U.S. Olympian Javier Molina, and the previously unbeaten Julian Rodriguez. Pedraza’s momentum was halted in March when he dropped a tightly contested decision to former unified world champion Jose Ramirez.

Pedraza said, “August 27 will definitely be a high-stakes battle between two world-class fighters. We are both coming to get back on the winning path. That’s the perfect recipe for a great fight. I know that a convincing victory against an opponent of Commey’s caliber will put me back in contention to capture that coveted world title opportunity. Despite what happened in my last fight, I still have my sights set on being crowned world champion at 140 pounds. I’m still chasing my goal of becoming a three-division world champion.”

Commey (30-4, 27 KOs), one of Ghana’s most accomplished fighters, captured the IBF lightweight world title in February 2019 with a second-round stoppage over Isa Chaniev. Since losing his title to Teofimo Lopez that December, Commey knocked out Jackson Marinez in six rounds and lost a decision to pound-for-pound legend Vasiliy “Loma” Lomachenko. After 34 fights campaigning as a lightweight, Commey now moves up to 140 pounds in hopes of winning a second world title.

“I am grateful to DiBella Entertainment and Top Rank to be fighting on ESPN as I begin my quest to become a two-weight world champion,” Commey said. “Pedraza is a gentleman and a great champion, and I will have to be at my best to earn the victory.”

Anderson said, “I am 100 percent healthy and more than ready to get back in the ring. I’m creating a legacy for my last name and growing as a fighter with every fight. Tune in on August 27 because ‘The Real Big Baby’ is back!”

The undercard — streaming exclusively on ESPN+ — is scheduled to include the return of heavyweight puncher Efe Ajagba (15-1, 12 KOs) in an eight-rounder against Hungary’s Jozsef Darmos (14-4-3, 10 KOs). Ajagba, a 2016 Nigerian Olympian, has not fought since last October’s defeat to Cuban star Frank Sanchez on the Tyson Fury-Deontay Wilder III undercard. Injuries delayed Ajagba’s return, and he’s looking to reclaim his status as one of the division’s rising talents.

Pedraza-Commey, the Jared Anderson-Miljan Rovcanin heavyweight co-feature, and Torrez Jr.-Canedo and will be televised live on ESPN, ESPN Deportes and ESPN+ at 10:30 p.m. ET/7:30 p.m. PT.

Canedo (4-2, 2 KOs), from Michoacán, Mexico is a five-year pro who will be making his stateside debut.

Torrez said, “I want to thank Top Rank for keeping me active and giving me the platform to showcase my talents. Every fight is a learning experience, and I can’t wait until August 27 in Tulsa.” 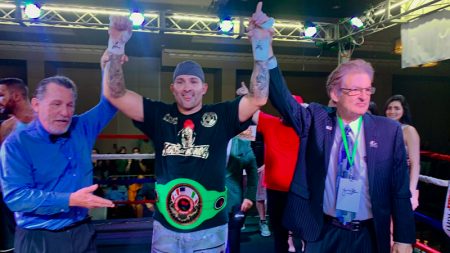 Quite a night at the Bayou Event Center in Houston, Texas, as Texan Alfonso “Tigre” Lopez was crowned Bridger champion of the North American Boxing Federation (NABF) by defeating Hungarian Jozsef “Gladiator” Darmos, in a tremendous fight.

The WBC recently created the Bridger division, which ranges from the upper limit of the 200lb / 90kg Cruiserweight division to 224lb / 101kg.