The six-bout card was promoted by King’s Promotions.

Lightweight James Bernadin remained undefeated with a fifth round stoppage over veteran Jairo Lopez in a scheduled six-round bout.

The time of the stoppage was 1:07 for Bernadin of Lancaster, PA who is promoted by King’s Promotions and is now 8-0-1 with five knockouts.  Lopez of Mexico 27-17. 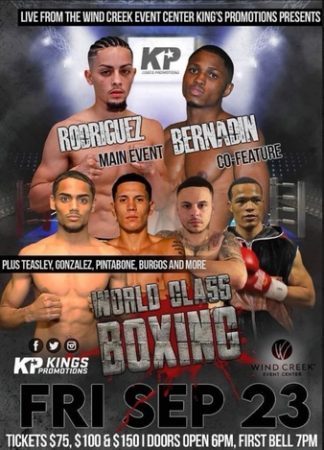 TRILLERVERZ presented an outstanding five-bout professional boxing card on Tuesday night at the Hard Rock LIVE in the Seminole Hard Rock Hotel and Casino as a prelude to the VERZUZ Battle between FAT JOE and JA RULE in the Hulu Theater at Madison Square Garden, both of which were broadcast on FITE.TV.

In the main event of the evening, DANIELITO ‘EL ZORRO’ ZORRILLA, (16-0, 12KOs), of Toa Baja, Puerto Rico knocked out Mexico’s PABLO CESAR CANO, (33-8-1, 23 KOs), in the second round. An overhand right to the head startled Cano before he took a knee and was unable to continue. Time of the stoppage was 0:35 of the stanza in their scheduled ten-round junior welterweight bout.

Said Zorrilla after the victory, “”This is a statement, I want to be a world champion. I am not playing. I will not stop until I beat everybody in my division. I want to fight the best. Miguel Cotto and Tito Trinidad, they have been an inspiration for me. I learn from them and now I want to follow their steps in the ring”.

(15-2, 10 KOs), after five rounds as the bout was stopped on the advice of the ringside physician. The more skilled and heavy -handed Albright controlled the action from the outset, dropping Dutchover in the four of the first five rounds prior to the stoppage.

Said Albright after the victory, “I train very hard every day and it showed tonight. I focused on his cuts like a shark. I didn’t know I’d hurt him that quickly in the fight but I stuck to my game plan and took care of business, it seemed like every time I hit him I hurt him.”

Also featured in a ten-round junior welterweight battle MIGUEL ANGEL MADUENO ‘EXPLOSIVO’ ANGULO, (25-0, 23 KOs), stopped SONNY FREDRICKSON, (21-5, 14 KOs) in the final round. With the first nine rounds fought at an aggressive pace by both fighters, the valiant Fredrickson weakened down the stretch and was stopped from a barrage of punches at the 2:04 mark of the final stanza.

“This fight was a little complicated at some point, but with the guidance of my corner, I was able to connect with the better punches and make the difference as the fight was progressing,” said Angulo. “I don’t want to call names, I want to continue growing in the division, but I expect tougher fights in the future until I become a world champion.”

Competing in the cruiserweight division, YUNIESKI ‘THE MONSTER’ GONZALEZ, (21-3, 17 KOs), knocked out TOMMY ‘KRYPTONITE’ KARPENCY, (31-7-1, 19 KOS), in the second round. After an even first round, Gonzalez dropped Karpency hard to the canvas with crunching body shots. With the southpaw unable to beat the count, Gonzalez was declared the victor at the 2:03 mark of the round.