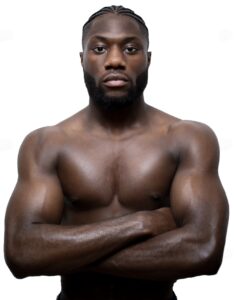 Jonathan Kumuteo left reality TV host Judge Rinder out for the count when he made a side-splitting appearance on his smash hit ITV show.

Now it’s boxing judges he needs to KO by impressing with his fists.

The Queensberry promoted Super-Welterweight who makes his professional debut on Friday April 30 appeared on Judge Rinder recently after asking him to settle a dispute with close pal Timi Anunlopo.

Kumuteo and his friend had initially refused Love Island offers, but asked what other shows were available. When producers mentioned Judge Rinder, Kumuteo told them: “Timi crashed my car.”

Jonathan, 25, explained that they’re still the best of friends, but were told as long as there is evidence of the car crash they could be booked for the popular afternoon TV show.

The former London amateur champion provided receipts and messages claiming the damage to his Range Rover that cost him £3156.36 to repair had been caused by his friend.

Kumuteo had his hand raised in the TV courtroom when Judge Rinder deducted 20% of the claim, but still awarded him £2525.09 which was paid by ITV.

He said: “I told Timi that if I won the case it would pay for a holiday for us, but unfortunately I haven’t held my end of the bargain, but I blame the pandemic.

“Hopefully we will be able to fly out sometime after the fight. Turkey is possible or we might do a little European tour.”

The host and TV audience were captivated by Kumuteo and Anunlopo’s humour.

Judge Rinder was stunned when the Kumuteo used language like ‘fam,’ street slang for someone you are close to and ‘Bad B’s’ which the boxer said meant ‘Bad and Bijou’ in reference to the women Timi dates.

Finchley’s Kumuteo added: “Honestly I was nervous leading up to it. You don’t meet Judge Rinder until you walk on the set.

“He shouts at a lot of people and I thought; ‘Damn, our case is quite silly. We might be in trouble from him, but I think it worked in our favour.

“It was a very enjoyable experience doing the show which was filmed at Media City, Manchester.

“You don’t even meet him after he makes the ruling. You do the interview afterwards and you go home.

“The team who work the show said that Judge Rinder enjoyed it and reckoned it had been one of the best in the last couple of years.”

Judge Rinder was also shocked when it emerged during the case that he was a neighbour of Kumuteo’s in well-heeled north London suburb Finchley.

“When the crowds return I am definitely going to send him a ticket to sit ringside and hopefully he will be there,” says Kumuteo.