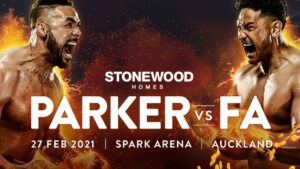 Fight Notes: Judges scorecards were 119-109, 115-113, 117-111 all for a Parker unanimous points victory. Parker was the aggressor throughout with many of the rounds hard to score. The bout was also hampered by many clinches with most being instigated by Fa. The end result was disputed by many as per the close rounds with the general consensus it could have gone either way. Even if scoring is subjective, the two wide cards in Parkers favour were unfair to Fa’s efforts.

Fight Notes: 7’1, 326-pound Long dropped Ahio in round 4. Ahio survived and eventually got to Long in the 7th round, laying him out with a left hook. Time of the stoppage was 2:55 of the 7th round for a Ahio knockout victory.

Fight Notes: Nyika was making his professional debut and succeeded with a KO victory. Time of the stoppage was 0:29 of the 1st round with Maio complaining about being hit behind the head.

Fight Notes: The bout was made at catchweight with Amouta making his pro debut. Time of the stoppage was 2:57 of the 1st round.

Fight Notes: Parker (younger broth of Joseph Parker) remained unbeaten with a unanimous points victory over Taito) Scores were 40×36 x3, all for Parker.