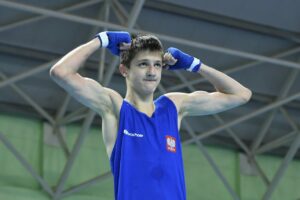 A long competition day with 47 contests was held at the EUBC Junior European Boxing Championships in Tbilisi on Day 4. Poland’s Ivan Kucherenko used his height advantage effectively and advanced to the quarter-finals following his second success in Georgia.

Poland arrived at the EUBC Junior European Boxing Championships with a well-prepared team. Light welterweight (63kg) boxer Ivan Kucherenko is a difficult opponent for everybody at the tournament. He is 10-15cm taller than anyone in his weight category and he used his longer hands against Belarus’ Maksim Zhurauleu who had a hard mission to move closer to Kucherenko. The Polish boxer stopped most of the Belarusian attacks and won their contest by unanimous decision.

‘I am so happy with my next success at the championships. I felt much better than in my first contest in Tbilisi and I could increase my speed this time. I like to compete a lot as well as the series of fights, and I am ready to win my quarter-final in Georgia,” commented his success Kucherenko.

Italy’s Samuele Gugliotta started his campaign against Latvia’s Denis Sorokins and tried to control the middle of the ring. The younger Italian was quicker in the attacks, therefore, he could avoid Sorokins’ punches and his counter-punches reached the target in the first round. The Italian light welterweight (63kg) boxer felt the tempo even better in the second round and his technical skills controlled their bout. Gugliotta enjoyed the last round and he deserved to win their preliminary contest. His teammate, EUBC European Schoolboys Champion Tiziano Guglielman dominated in his contest against Belarus’ Mikita Bruyeu and advanced to the last eight in the light middleweight (70kg).

Finland’s Jimi Noioso opened his competition with success but his second rival was Georgia’s Giorgi Natroshvili who is a skilled boxer in the light middleweight (70kg). The Finnish boxer tried to move more on his feet but when he stopped, the Georgian used his quicker punches to catch him. Natroshvili landed quick left jabs in the second round while Noioso concentrated mostly on his defense. The Georgian impressed in the third round and the referee from Montenegro counted the Finnish boxer, therefore, Natroshvili advanced to the quarter-finals. The Georgian will be meeting with Germany’s Kahraman Uzun who stopped Romania’s Andrei Ilie Bratu without any problem.

Novikov and Kajaia performed well in the lightweight (60kg)

Israel’s Yehor Novikov competed at the pinweight (46kg) as a junior in 2020 but he moved up six divisions and represents his country in the lightweight (60kg). The Israeli talent met with Hungary’s Almos Lantos who is also a newcomer in this weight category. Novikov, who has Ukrainian roots, landed jabs from a longer distance in the first round and tried to control the fight. The Israeli boxer was able to keep his level until the end of the contest and eliminated his 16-year-old Hungarian rival. In the parallel bout of the first fight of the evening session, Georgia’s Demur Kajaia dominated his lightweight (60kg) contest against Belgium’s Lorenzo Camposeo.

Another Poland’s tall boxer in action was Tobiasz Zarzeczny who had to meet with Israel’s newcomer Israel’s Siyel Jiryis in the last 16 of the light middleweight (70kg). The Israeli boxer won all of his contests at their Junior National Championships by RSC but the Polish hope was an experienced talent, therefore, his rival could expect strong resistance. Zarzeczny kept the Israeli boxer on a long distance. His footwork was also better than his opponent’s one in the first round. Jiryis increased his tempo and his strength controlled the contest in the second and third rounds which means the Israeli boxer joined the quarter-finals.

Forty women’s quarter-finals will be held on the fifth competition day at the EUBC Junior European Boxing Championships in Tbilisi tomorrow. Twelve of the female categories will be competing for the guaranteed medals in the Georgian capital.