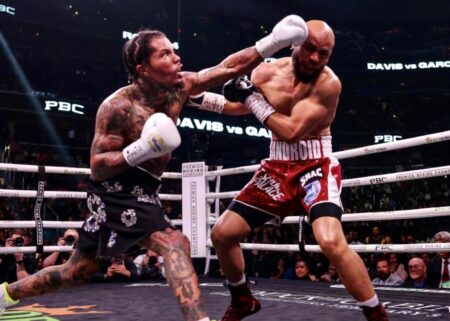 Boxing superstar and five-time world champion Gervonta “Tank” Davis sent a supportive sold-out crowd in the nation’s capital home happy with another memorable victory as he displayed his skills and then stopped super featherweight champion Hector Luis Garcia in the ninth round Saturday night headlining live on SHOWTIME PPV from Capital One Arena in Washington, D.C. in an event presented by Premier Boxing Champions.

The Baltimore-native Davis delighted the 19,731 fans in attendance at the sold-out event as he methodically broke down the previously unbeaten Garcia, before hurting him badly with his vaunted left hand late in the eighth round. Visibly shaken on his way back to the corner, Garcia stayed on his stool as the bell for round nine rang. Moments later, his trainer Bob Santos advised referee Albert Earl Brown to stop the fight, with the official stoppage coming 13 seconds into round nine.

“When I got the shot to my head in the final round, that’s when I couldn’t see from my eye,” said Garcia, who owns the WBA Super Featherweight World Title. “I didn’t know where I was when he hit me with that shot. My vision is back but my head still hurts. I couldn’t see from my right eye. It was going well up until that point. I was picking my shots.”

The two champions jockeyed for position over the first three rounds before Davis got the fans back on their feet with a series of hard power shots late in round four. Garcia displayed a solid straight left hand that he employed to counter the speed of Davis’ jabs, and was the busier fighter according to CompuBox, throwing 345 punches to Davis’ 239.

However, it was Davis’ effective and efficient attack, which built as the fight went on, that helped him take control of the fight. After landing only four power punches in the first three rounds, Davis connected on 69 in rounds four through eight.

“I wasn’t throwing a lot of shots in the beginning because I was trying to beat him mentally,” said Davis. “I was trying to trick him with my hands and my eyes and things like that because he’s a tough fighter. I had to bait him.”

The victory was Davis’ fifth successful defense of his WBA Lightweight Title, and one that the judges saw him in control of throughout, as he led 79-73 on two cards and 78-74 on the third. After the fight, Davis sent a message to his fellow unbeaten rival Ryan Garcia, as the two near a previously announced blockbuster clash this spring.

In the co-main event, rising welterweight star Jaron “Boots” Ennis (30-0, 27 KOs) cruised to a unanimous decision over Karen Chukhadzhian (21-2, 11 KOs) to earn the vacant Interim IBF Welterweight Title after going 12 rounds for the first time by the score of 120-108 three times.

“I learned to just take my time and to not rush anything,” said Ennis. “I’m glad I went 12 rounds. It felt great. I felt I was in the best shape. I just needed to throw a little more punches. I should have got him out of there.”

Philadelphia’s Ennis moved himself one step closer to a world title opportunity against the cagey and evasive Chukhadzhian. The Ukrainian showed deft footwork throughout the fight, never staying in the pocket long enough for Ennis to put combinations together while landing the occasional counter.

“He ran a lot,” said Ennis. “Hats off to him since a lot of guys didn’t want to fight me. So shout out to him for coming here and taking this fight.”

“He had a different level of speed than I’m used to,” said Chukhadzhian. “I don’t make any excuses though. I wish I could have done more to hurt him.”

Ennis remained patient through the championship rounds, as he tried in vain to break down his backpedaling opponent before settling for the decision. With the interim title in tow, Ennis set his sights on unified IBF, WBA and WBC Welterweight Champion Errol Spence Jr.

“Everyone knows I want Spence,” said Ennis. “I’ll keep waiting until the time is right and Spence is ready to take the fight.”

Pay-per-view action also saw the hard-hitting Roiman Villa (26-1, 24 KOs) storm back on the scorecards by dropping the previously unbeaten Rashidi Ellis (24-1, 15 KOs) twice in the 12th and final round to win a thrilling majority decision in their IBF Welterweight Title Eliminator. One judge scored the fight 113-113, but was overruled by two 114-112 tallies in favor of Villa.

Down on two cards entering the final round, a relentless Villa broke through against a tiring Ellis and landed a bruising left hook that sent Ellis down early in the 12th. Ellis worked valiantly to stay on his feet and see the final bell, but suffered a second knockdown with 30 seconds left in the fight.

“He was a tough fighter,” said Villa. “He moved a lot. He does hit hard. The first couple rounds I was a little tight but then I got loose. I was on top of him from the first round. I know that fighters such as him who are quick sooner or later will get a little tired and that’s what I took advantage of.”

After Ellis won the first five rounds on all three cards, Villa began to gain momentum through the middle frames and swept the final four, including the fight-changing 12th. While Ellis out-jabbed Villa by a staggering 164 to 13 margin, the power punch disparity was just 103 to 101 in favor of Ellis. In round nine through 12, Villa held a 58 to 24 lead in power punches landed.

The bout was contested at close quarters throughout, with Villa pressing the action while Ellis was content to sit back and fire counters. Included in those counters were a consistent effort to target Villa’s body, as he held a 53 to 10 edge in body shots.

“My corner told me to knock him down in the 12th round,” said Villa. “I couldn’t do it on the first try but I kept going. I thought he just fell on the last knockdown so I wasn’t sure if it was a knockdown. But if they want the rematch we’ll give them the rematch.”

Following the judges’ ruling, Ellis stated his belief that he had won the fight and his desire for an immediate rematch.

“I felt good, I can definitely tell the difference at the new weight,” said Andrade, who won by three scores of 100-88. “But the speed and combinations and using my IQ was the plan today and that’s what we did. The weight was different.”

Andrade, a former world champion at 154 and 160 pounds, leapt at Nicholson and connected with a left hand just moments after the opening bell, setting the tone for the action to follow. Andrade sent Nicholson to the canvas in round two with a combo to the head, although Nicholson claimed the knockdown should have been ruled a slip.

Nicholson nearly changed the tide early in round five as he appeared to connect with a body shot on Andrade that sent him to the canvas. However, referee Malik Waleed called the sequence a slip, before Andrade rose to his feet to win the round.

“The only way I can say I’m the best is by fighting the best,” said Andrade. “Everyone knows that Demond Nicholson is a dog. That’s why we took this fight. He took this fight because he knew I was coming up and he definitely has the animal in him. He showed it today.”

Andrade’s accuracy and volume proved to be the difference, as he connected at a 45% clip, out-landing Nicholson 145 to 28. Andrade punctuated his dominance with a knockdown in the final round, landing a perfect counter that forced Nicholson’s glove to hit the mat. Nicholson made it to the final bell, but Andrade emerged with a dominant victory.

Preceding the pay-per-view, SHOWTIME PPV COUNTDOWN streamed live on the SHOWTIME SPORTS YouTube channel and SHOWTIME Boxing Facebook page and was topped by sensational prospect Vito Mielnicki Jr. (14-1, 9 KOs) scoring a fourth-round knockout of Omar Rosales (9-2-1, 5 KOs). Mielnicki’s onslaught came late in round three, as a series of power punches sent Rosales into the ropes late in the frame. Early in round four, Mielnicki’s attack forced Rosales’ corner to throw in the towel, with referee David Braslow waving off the fight 26 seconds into the round.

The streaming presentation also included undefeated rising star Brandun Lee (27-0, 23 KOs) in a super lightweight attraction that saw him dominate Argentina’s Diego Luque (21-11-2, 10 KOs) via a fourth-round TKO (2:55). Nearly five months after he was knocked down for the first time in his career in a fight he otherwise dominated, Lee took a mostly patient approach on Saturday, carefully picking apart Luque before jumping him in the fourth round. A series of right hands caused Luque’s trainer to throw in the towel.

Davis vs. Garcia will air on SHOWTIME on Saturday, January 14 at 10:30 p.m. ET/PT and will include Jaron Ennis’ Interim IBF Welterweight Championship with Karen Chukhadzhian.

The event was promoted by GTD Promotions and TGB Promotions. The Ennis vs. Chukhadzhian bout is promoted in association with D&D Boxing. 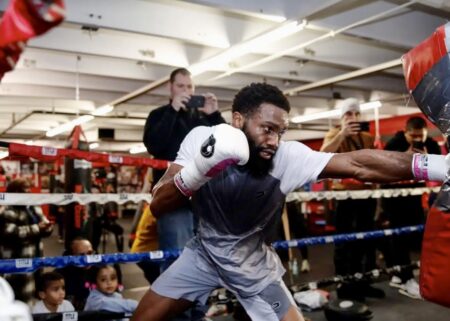 Undefeated rising welterweight star and Philadelphia-native Jaron “Boots” Ennis held a media workout in his hometown on Tuesday as he prepares to take on IBF No.4-rated welterweight Karen Chukhadzhian for the Interim IBF Welterweight Title in the co-main event of a SHOWTIME PPV on Saturday, January 7 headlining a SHOWTIME PPV from Capital One Arena in Washington, D.C. in an event presented by Premier Boxing Champions.

Tickets for the live event, which is promoted by GTD Promotions and TGB Promotions, are on sale now and can be purchased online at ticketmaster.com and capitalonearena.com. The Ennis vs. Chukhadzhian bout is promoted in association with D&D Boxing.

Here is what Ennis and his father and trainer “Bozy” Ennis had to say Tuesday from the Philly’s Next Champ gym:

“I haven’t watched any footage of my opponent but my team has been watching him. We have a game plan for what he does well.

“I’m definitely excited to have people coming from Philly down to D.C. for the fight. It’s only a couple hours away, so you’ll definitely hear Philly in the building.

“It doesn’t matter where we’re fighting at, I’m going to train just as hard. We prepare for every single fight like it’s a world title fight.

“I’ve just been watching a lot of Mike Tyson myself. He put a lot of punches together. Triple, doubles, same hands, lots of knockouts. He didn’t see too many late rounds. I’ve been watching him a lot this camp.

“I’m training all year round. The holidays don’t affect the schedule. I eat good, my weight is on point and everything is good. My last day off was on Christmas, but that’s only because Sunday is my normal day off. If it was on a Saturday, I would have trained.

“I feel like Errol Spence Jr. would fight me. I’m going in there with the intention of winning the interim title, then fighting Errol next. I think we can make it happen.

“It’s safe to say we’re looking to have a short night on January 7.”

“We don’t change up the preparation much fight by fight. We just keep trying to work harder and harder. We’re just putting in the work.

“I don’t watch the opponents, I let Jaron’s brothers do that. I watch the first round of the fight and then I go from there. If you start looking at one fighter too much, you can get into a bad situation if they get hurt and have to be replaced. We train to face any kind of style.

“We took our time. We’ve waited around. The only thing holding us up is that we knew Spence was the mandatory, but we knew he was working on the fight with Terence Crawford. We’re definitely looking to fight three times next year now.”