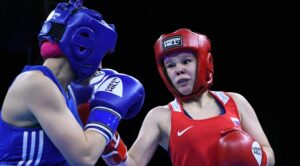 Three Russian girls – Renata Mingalimova, Karina Korobova and Zukhro Umarbekova – defended their titles at the 2021 EUBC Junior European Boxing Championships in Georgia following their success at the previous edition of the tournament.

In total, 13 women’s finals were held on the last competition day in Tbilisi. The gold medals were shared between Russia, Ukraine, Romania and Cyprus.

Boxers who were born in 2005 and in 2006 were eligible to attend the junior tournament.

One of the most anticipated finals happened in the women’s flyweight (50kg) where Russia’s defending champion Renata Mingalimova and Ukraine’s Aurika Kostrytska met. The 16-year-old Russian arrived in Tbilisi as the main favorite. She started her final bout with better hooks and received the advantage in each scorecard. It definitely was her best fight at the tournament with a high number of good punches. Although Kostrytska tried hard to adapt to her rival’s style, her defense appeared to be not good enough. Mingalimova won and defended her title.

“It is my third European title and I couldn’t be more excited. I had the game plan against the Ukrainian boxer and I could follow it until the end of the bout. I expected more actions from my opponent, therefore, I believe I deserved the gold medal,” said Mingalimova after the final.

Last year, Anastasia Kool from Russia was just a reserve boxer at the EUBC Junior European Boxing Championships. For the Tbilisi edition, she received the right to attend the tournament – and it was a success. Russian light bantamweight (52kg) boxer had a few difficulties in the first round against Spain’s Noelia Gutierrez Salmeron However, in the second one she found the right speed. She used her longer reach well and attacked more than her rival, the only finalist from Spain. Kool impressed in the third round and gained the well-deserved gold.

“I feel that I boxed very well today and I chose the best tactic against the Spanish boxer,” summarized her first European success Kool.

Russia’s Karina Korobova was a gold medalist at the 2018 EUBC European Schoolgirls Boxing Championships and at the 2020 EUBC Junior European Boxing Championships. The 16-year-old Russian featherweight (57kg) boxer met in the final with Ruhr Games winner from Germany, Christovalantou Koutsochristou. The unbeaten Korobova was physically stronger than her inexperienced German rival and dominated the first round with clear punches. Korobova landed quicker jabs and overcame Koutsochristou in the attacks, therefore, the second round was also clear for the Russian. Korobova dominated all of the exchanges and claimed her third European title after Albena and Sofia.

“I am so happy that I could win my third gold medal at the European Boxing Championships. The feeling is fantastic that I could do that. I believe that my second round was the best today and the decisive one,” commented her victory Korobova.

Romania’s finalist Amalia Nita proved excellent technical performance in the previous stages and in her last fight in Tbilisi she faced Poland’s lone finalist, Karolina Kuhn. The Romanian light welterweight (63kg) boxer used her longer reach and footwork to land punches in the first round and took a lead on the scorecards. She was quicker than her Polish rival in the second round and continued her dominancy. Nita danced around the Polish talent and kept moving to be a hard target for Kuhn. The Spanish referee counted one-time the Polish boxer in the third round which guaranteed Nita’s gold medal in Tbilisi.

“I am not able to tell many things after my final. I won the gold medal and I am over the moon. That is what I worked for,” said Romania’s Amalia Nita after her first major international title.

Russia’s southpaw Zukhro Umarbekova had a close semi-final against Hungary’s Nikolett Kovacs, therefore, the defending champion of the light middleweight (70kg) planned to do better performance in the final. The 16-year-old Russian, who grew rapidly last year, worked from a long distance in the first round against Germany’s Emily Dittrich. Umarbekova could reach her German opponent in almost all of their exchanges and controlled their final. Umarbekova stopped her rival’s attacks, her right-handed hooks and her left jabs were decisive in the final. The Russian boxer defended her title as Renata Mingalimova and Karina Korobova in Tbilisi.

Okhotnikova and Chernenko won the heaviest weight classes in Tbilisi

Russia’s Junior National Champion and Junior Nations Cup winner Sofia Okhotnikova finished the first round of her final strongly and took the lead on the scorecards against Ukraine’s Viktoria Sherbyna. The Russian light heavyweight (80kg) boxer was quicker, and her rapid attacks were too strong for the Ukrainian Junior National Champion. Okhotnikova followed her game strategy in the same way while Sherbyna took more risks. The Russian southpaw had better technical skills and caught Sherbyna with strong jabs at the end, therefore, Okhotnikova could celebrate her gold medal.

List of the winners at the EUBC Junior European Boxing Championships