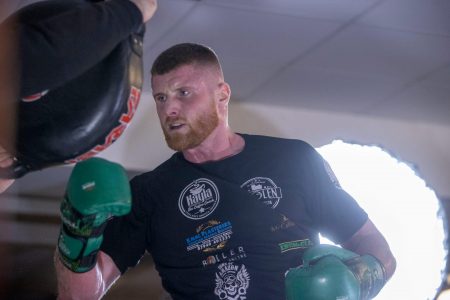 It’s often an overused cliché, but David Jamieson is promising Fightzone viewers fireworks when he fights for his first title on Friday February 18 at Trump Turnberry, Scotland, on a joint Fight Academy and Kynoch Boxing Promotions Card.

The exciting cruiserweight will face Swedish champion, Samo Jangirov, for the International Boxing Organisation (IBO) International Title with the East Kilbride man in confident mood ahead of the – on paper – 50/50 contest.

Big-punching Jamieson, 30, has lost just one in eight – to top prospect Mikael Lawal – and stopped five opponents since turning over in 2018. Never out of the gym, the big man understands completely the importance of entertainment in boxing and is ready to tear up the British cruiserweight division.

Jamgirov – originally from Azerbaijan – hasn’t been matched easy in his adopted homeland of Sweden. Winning the Swedish national crown in 2019, the 36-year-old has a similar record to Jamieson, having lost just twice in 10 outings and – also like his counterpart – fights on the front foot, which guarantees entertainment!

“I’ve watched a couple of videos of him, seen enough and know what I need to do,” explained Jamieson. “He’s got a similar record to me and I’m taking him as a dangerous opponent. I’ve got a wee game plan together though and it’s 10 threes [three minute rounds], so that’s half an hour and I’ll catch up with him at some point!

“He’s a heavy, well-built boy. He’s game, he’ll stand and trade and is happy to let his hands go, but that will play right into my hands. Guys that want to have it with me, that’s what I’m looking for. I’ll box him early doors, then when he starts to trade with me, that’s when I’ll let them go! If he’s willing to meet me in the centre of the ring then it’ll not last long … expect fireworks!”

Promoter and manager, Sam Kynoch, stated: “This is a 50-50 and Jamgirov is a very credible opponent. It’s a test and the type of fight that David wants, and he’s jumped at the opportunity. He’s had a great training camp though and is ready for this challenge, and his first title fight. They don’t pad records over there [in Sweden] so Jamgirov is a seasoned pro but if David wants to get to where he wants to be then this a fight he should win – so let’s see how he goes.”

The card will feature some of Scotland’s best young fighters including Commonwealth Featherweight Champ, Nathaniel Collins; the return of unbeaten 12-0 welterweight prospect, Michael McGurk; as well as another highly-rated Scottish fighter, Kieran Smith, who has lost just once in 17 fights. Also on are Irish-based Kate Radomska and Hamilton’s Jordan Grant.

David Jamieson will fight for his first title live on Fightzone, and is then calling for a mouth-watering domestic dust-up with cruiserweight rival, Iain Martell.

Wrecking machine Jamieson brings excitement every time he gets in the ring. The 30-year-old has five big KOs from seven wins, with just a single early career defeat on his record to highly-rated Mikael Lawal in a three-round ‘Ultimate Boxxer’ bout.

Up next, on February 18 in Turnberry, on a Fight Academy and Kynoch Boxing card, the East Kilbride man will contest the vacant International Boxing Organisation (IBO) Cruiserweight Title. With his opponent still being finalised, Jamieson is taking nothing for granted but says if he does comes through the test then there is just one man in his immediate sights … Iain Martell.

If the fight can be made, it’s one that British boxing fans will love. Martell brings similar viciousness whenever he steps through the ropes. The Norfolk-based Londoner, 31, is unbeaten in 11, also has five early finishes and has said previously that he is willing to meet Jamieson.

If both men can successfully negotiate their impending fights (Iain appears on March 4 in London, also on Fightzone), and with the pair both in the Fight Academy stable – it’s a fight that could potentially be easy to make, and one both should be applauded for taking.

“It’s phenomenal to get back out on another Fightzone show, and having a contract with Dennis Hobson, it’s a dream come true,” said Jamieson.  “It’s all laid out there for me, there’s going to be shows coming thick and fast and keeping me nice and busy.

“To be fighting for my first title is massive, and at such a prestigious venue too. It’s just a few miles up the road from my home town and I’ll be bringing a massive crowd. There’ll be 250 from East Kilbride – it’ll be hopefully not the biggest night of my career because I want to eventually press onto bigger and better things, but it’ll certainly be one of the most memorable.  At Trump Turnberry, lifting a belt above my head … it’ll be cracking.

“The fight with Iain is one we’ve actively been seeking. It’s no secret that if we handle business on the 18th then that is the fight we’re looking to make, as soon as possible. Whether Iain and his team are as keen … I don’t know!

“I do rate him, he’s a tough boy but if you look back at the Tottenham broadcast when he was doing some commentary on my fight [November 5th 2021] – I don’t know what regard Iain holds himself in but he says he does everything that I do, but he doesn’t!  He says he goes to the body well, says he’s knocking people out with one shot – I’ve not seen that in any of Iain’s fights, but I’ve seen me do it! I don’t know where he’s coming from.

“One thing I do know though is it’ll be a cracking fight for the fans. We’re both willing to stand and trade, but I’m too big and too strong. I think I’d be too much for Iain and stop him inside the distance.

“I’d like to think this is an easy fight to make. We’re both with Fight Academy, and you hear ‘I want it, I want it’ – but I do actually want it, make no mistake about it!  Hopefully we can get it on for in the spring.”