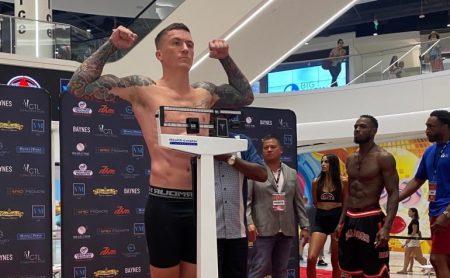 Harley “Heavy Hands” Burke in six pro fights has stopped all of his opponents via knockout and the 27-year old hopes to become the next Irish sensation fighting out of Yonkers, New York. He claims to have the tools and join the elite names of Irish boxing heritage.

But, as he says, “I want the knockout. I hate decisions.” Burke will be seeking another knockout when he opposes Brandon Maddox (8-5-1) in a six-round super middleweight bout at Bergen County Fight Night, Friday evening July 29 at American Dream in East Rutherford, NJ.

Burke is excited to show his knockout power and ability to entertain on the second Abella Boxing Promotions card of Boxing, “Bergen County Fight Night Night II” and before a capacity crowd.

A good many of his fans from Yonkers, NY will be there cheering for the next knockout. Harley, a construction worker during the day, who dedicates time at Champs Gym in nearby New Rochelle, will have two bus loads of fans making the trip to East Rutherford.

He says Irish boxing fans are thriving for their next superstar. Fighting on a consistent basis, perhaps inking a promotional deal with Abella Boxing Promotions, could get him to the top. Boxing is a tough business but an honest and proper promoter does make a difference towards success and promoter Scott Abella is the first step.

This upcoming fight, and, as they say, came in the right place at the right time. Robert Park, a former trainer and Operations Director of Abella Boxing Promotions, witnessed Burke and his power during a sparring session at Champs Gym with Chaz Nguyen, who had a successful pro debut on the first Abella card in early April at The Terrace in Paramus NJ.

Then, back in March, Harley was training for an opportunity to fight on the Amanda Serrano Jake Paul promoted boxing card at Madison Square Garden, but his fight got pushed back. Park stayed in contact and Burke inked his Abella Promotions Boxing debut.

“Could not fight on the first Abella show,” Burke said. “I sparred with Chaz; they loved it. They kept me in mind for the next one, that’s how it came about. They saw me in the gym. They were not coming off someone else’s word.”

And getting the up-close look is always the best way to evaluate a fighter. Burke left that type of impression and is looking forward to his next fight under the Abella Boxing Promotions banner.

“A perfect combination,” he says with confidence about working with Scott Abella and the promotion. He looks to throw those combinations of jabs and dispose of another opponent.

It’s his style. And it’s also entertaining the fans. Burke says if his fight is boring then he is not doing his job in the ring. He has an old school mentality and a bit of the new age that reminds many of the great fighters of Irish descent.

Burke had a successful and brief amateur career. He says he approached those contests like fighting a professional fighter that provided discipline and more knowledge of the sport. The jump to the pros included fights in North Carolina before small and loud crowds.

But now, Burke will be fighting close to home. And there will be that contingent of Irish fans cheering him on. They will come from the local pubs up in Westchester. He admits to having a drink or two, but not when training for a fight.

And John Duddy is an idol he will never forget. That was the first fight he attended up in Boston Ma. Burke says Duddy admitted to probably never winning a major title, but he was entertaining and everybody loved him.

In other words, a goal is to win a championship and so few get that opportunity. But Harley Burke is on a mission to keep winning and display his Irish heritage with or without a championship around his waist.

“Definitely, Irish American is one thing,” Burke says. “Being one of the best fighters coming out of Yonkers is another thing. I grew up in Yonkers, some good fighters from here. What I’m aiming for is a legacy. I gotta win this fight first. I just got to get through this fight and get my hand raised.”