Oscar Valdez is presented with keys to the city of Nogales 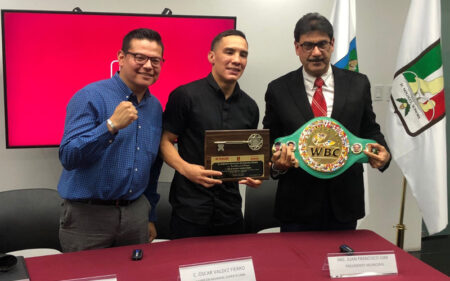 As a “Key” recognition of his sporting career and for being an example for the children and youth of Nogales, the new Municipal President of the Mexico’s border city, Juan Gim Nogales, presented WBC super featherweight champion Oscar Valdez with the keys to the city.

The municipality representative, who received the 130-pound World Boxing Council champion in his office, recognized the sporting achievements that the Sonoran has achieved, not only as a professional but since his time as an amateur, where he managed to participate in two Olympic Games being the only Mexican to do this.  Oscar participated in the Beijing 2008 and London 2012 games.

At the event, the Nogales Mayor highlighted the humility of Valdez, who always returns to his city after a fight, commenting that the boxer represents the finest values of that land of champions.

“The municipal government of Nogales, Sonora presents the keys to the city to our Oscar Rafael Valdez for his outstanding sports career and representing the best values of this land of champions,” he said.

The world champion at 126 and 130 pounds, recognized that as a child he dreamed of being recognized in boxing, the sport in which he began at eight years of age, and to which he has dedicated more than two decades of his life.

After receiving the keys to the city, Oscar Valdez along with municipal officials, including the Mayor and Sports DIrector Marco Martínez, went to the boxing gym where Oscar trained as a child.

“Just like now these kids come to see me and get to know me, that’s how I was a few years ago, I remember Sugar Ray Leonard came here once, and I couldn’t believe it,” he commented.