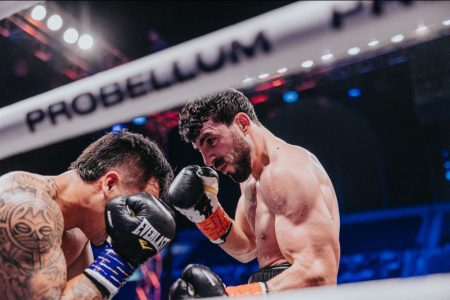 Hovhannes Bachkov forced the referee to step in and spare Cristian Coria further punishment after pummelling his Argentinian rival in Dubai tonight.

The dark horse of the super-lightweight division mauled Coria for seven rounds before the official waved it off near the end of the next session, deciding the 39-year-old had taken too many shots.

Bachkov, who sustained a relentless pace and threw an incredibly high volume of punches, now moves to 3-0 as a professional and with Probellum’s backing, the Armenian plans to be in world title contention in double-quick time.

The 29-year-old, an Olympic bronze medallist, cuts a menacing figure and in becoming only the second man to stop the experienced and tough Coria, he sent a warning shot to the super lightweight division.

Bachkov targeted the right hand side of Coria’s body throughout, hammering the 39-year-old with sickening left hooks, and though he has exceptional amateur credentials, his come-forward style looks tailor made for the pros.

“I planned that and tonight I did my job effectively and quickly,” said the outstanding Armenian.

Britain’s Khalid Ayub extended his perfect start to life in the pros with an impressive win over Annem Sivareddy of India.

The UK’s Ayub was trying to force the stoppage in a dominant display but had to contend with a points win, which moves him to 3-0 as a pro.

In the opening bout of the evening, Fahad Al Bloushi of the UAE moved to 8-1 as a professional with a points win over Mohamed Kashinde of Tanzania.

India’s Faizan Anwar saw off the challenge of Khojiakbar Qodirokhunov over eight rounds at the Dubai Duty Free Tennis Stadium, winning 80-72, 78-74 and 80-72 on the scorecards.

Lightweight Bader Samreen dropped Denis Bartos twice in the fourth round of their contest to score an impressive stoppage win.

The referee waved the contest off at 1:47 of the session after Samreen sent his Czech rival to the floor with a crunching uppercut.

Dubai-based Brit Jamie King sent Naveen Verma to the floor with a heavy left hand in the third round of their cruiserweight bout, but had to settle for a points win after four rounds. King moves to 3-0 as a pro.